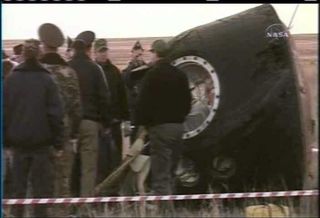 A Russian spacecraft carrying two astronauts and the world's first female space tourist rocked safely back to Earth while dangling from parachutes today a few hours after casting off from the International Space Station (ISS).

ISS Expedition 13 commander Pavel Vinogradov, flight engineer Jeffry Williams and U.S. entrepreneur Anousheh Ansari undocked from the orbital laboratory at 5:53 p.m. EDT today and their Soyuz TMA-8 spacecraft landed in the steppes of Kazakhstan near the small town of Arkalyk just before dawn at 9:13 p.m. EDT.

"It was the ride of a lifetime," Williams told a NASA spokesman after extraction from the spacecraft.

After landing, the three-member Soyuz crewmembers were met by medical team and changed out of their spacesuits into more comfortable clothing. They will be ferried by helicopters to the city of Kustanai, where they are scheduled to meet with local officials and presented with Kazakh outfits as part of a traditional landing ceremony.

Later, the three will be flown to Chakala Air Base outside of Star City near Moscow, where they will be greeted by their families and Russian and American space officials.

The landing marks the end of a six-month mission for Vinogradov and Williams that began on April 1. During their mission, Vinogradov and Williams hosted two NASA shuttle crews, participated in spacewalks to help ISS construction and saw the delivery and addition of a new pair of trusses and solar wings to the orbital laboratory.

For Ansari, it is the conclusion of an 11-day space trip, nine of which were spent aboard the space station.

On Sept. 20, Ansari launched from Baikonur Cosmodrome in Kazakhstan with Expedition 14 commander Michael Lopez-Alegria and flight engineer Mikhail Tyurin. Ansari is the fourth person and the first female to pay an estimated $20 million to visit the space station under a deal arranged between the space tourism firm Space Adventures and the Russian Federal Space Agency.

The trio said their goodbyes to the Expedition 14 crew earlier today as the hatches between the Soyuz and the station closed around 2:45 p.m. EDT.

"Like Pasha says, our work here is done," Williams said. "We leave it in good hands with Expedition 14."

Ansari described her time aboard the station as "magnificent."

"My work is not finished and I hope to have this experience once again in the near future," she said.

As a parting gift, Tyurin gave Ansari his personal Cosmonaut badge and the stuffed toy-bear that flew inside their Soyuz capsule during launch and which served as the crew's "Zero-G sensor" to let them know when they had reached space.

Left on the space station are Lopez-Alegria, Tyurin and German astronaut Thomas Reiter. Lopez-Alegria and Tyurin are slated for a six-month stay aboard the station, while Reiter will be relieved in December by NASA astronaut Sunita Williams, who will arrive with Discovery as part of STS-116.

Williams is scheduled to spend several weeks in Star City near Moscow with Vindogradov for medical examinations and debriefing before returning home to Houston on Oct. 19.