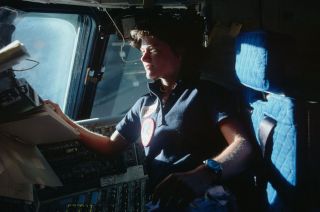 A statue of the late astronaut Sally Ride, the United States' first woman in space, could stand in the Capitol, if a lawmaker's proposal continues to advance.

The California State Senate on Monday (April 13) narrowly passed Joint Resolution 4, a "measure [memorializing] the Congress of the United States to place a statue of Sally Ride next to the statue of former President Ronald Reagan in the Congressional collection representing California."

The resolution, introduced by Senator Ricardo Lara (D-Bell Gardens), cleared with a vote of 22 to 10 — just one more vote than what was required for it to pass. [Sally Ride, First American Woman in Space (Pictures)]

"The California Senate is sending a powerful message by approving SJR 4," Lara said in a statement. "It's time that we modernize our representatives in the Statuary Hall and recognize the invaluable contributions of women to this great state."

Sally Ride is a modern depiction of the American Dream," he said.

National Statuary Hall, located in the U.S. Capitol building in Washington, D.C., is comprised of statues donated by the 50 states to honor individuals notable in their history. Each state may contribute two statues.

At present, California's statues honor Reagan and Father Junipero Serra, a Spanish priest who founded the state's first Catholic missions. Lara's resolution calls for Serra's statue, which was installed in 1931, to be replaced by one for Ride. (Reagan's statue, which took the place of orator Thomas Starr King's monument in 2009, will not be eligible for replacement for another four years.)

"Serra can best be memorialized by locating his statue in a place of honor in the Capitol of California where citizens and visitors can enjoy it and be reminded of his significant historical impact upon our state," the Senate bill reads.

Serra, who's set to be canonized when the Pope visits the U.S. in September, has a conflicted history. Though he is revered within the Catholic Church and a central figure in California's statehood, historians have described Serra as ascetic and uncompromising in his zeal to convert Native Americans to Christianity, enslaving them and leading to the death of thousands of Native Americans.

Still, those who oppose the replacement of Serra's statue have defended the friar for the influential role he played in founding the state and that his pending canonization would make him only the second saint to be honored in Statuary Hall.

"Removing his statue would be an affront to the people of California and would be an insult to the tens of millions of Catholics that call California home," State Sen. Jeff Stone (R-Riverside) said, addressing the Senate before the vote.

Ride's addition to the U.S. Capitol would also set her apart among the state honorees. Though not the only astronaut – Colorado's statues include the late Apollo 13 astronaut Jack Swigert – she would become the first member of the lesbian, gay, bisexual and transgender (LGBT) community to be memorialized.

Ride would also be the first woman to represent California in the hall.

Ride, who died in 2012, became famous for launching with the STS-7 crew on space shuttle Challenger in 1983. The first U.S. female astronaut to fly into space, she was only the third woman worldwide to orbit the Earth, following two Soviet-era cosmonauts, Valentina Tereshkova in 1963 and Svetlana Savitskaya in 1982. [Video: Sally Ride Recalls Her 1st Space Mission]

After her second launch on the shuttle, Ride left NASA to become a physics professor and a champion for improving science education. She founded her own company, Sally Ride Science, to pursue her passion for motivating girls and young women to pursue careers in science, math and technology.

"Sally would be very honored to represent her home state of California in the National Statuary Hall Collection. She believed that diverse role models are important in all areas ... to inspire young girls and boys," Tam O'Shaughnessy, Ride's life partner and the chief executive officer of Sally Ride Science, stated. "Having a statue of Sally on display in our nation's capital would send a wonderful message of inspiration and equality to the world."

According to Lara, O'Shaughnessy and the Ride family are establishing a foundation to raise the estimated $500,000 needed to replace Serra's statue with one for Ride.

First though, the resolution needs to be approved by the state assembly and governor before the request is sent to the Joint Committee on the Library of Congress.