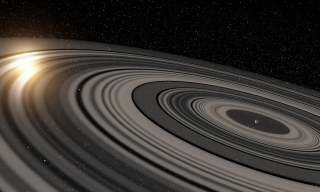 The exoplanet, called J1407b, could even harbor at least one Earth or Mars-sized moon, judging by a large gap in the rings, scientists have found. This discovery marks the first time researchers have found this kind of ring system outside of the solar system.

"This planet is much larger than Jupiter or Saturn, and its ring system is roughly 200 times larger than Saturn's rings are today," co-author of a new study about the rings Eric Mamajek, of the University of Rochester in New York, said in a statement. "You could think of it as kind of a super-Saturn." [The Strangest Alien Planets Ever]

Exoplanets reveal themselves in their host star's light. If a planet passes directly in front of its host star as observed from Earth, then the planet will block part of the star's light and it will appear as though the star has momentarily dimmed. But in 2007, the young star 1SWASP J140747.93-394542.6 (located 433 light-years from Earth, toward the constellation Centaurus) showed a complex series of dimmings that lasted 56 days.

Mamajek and his colleagues first spotted the ring system in 2012. At the time they thought the dimming was caused by a ring system with at least four large rings. But further analysis by Matthew Kenworthy of the Leiden Observatory in the Netherlands and Mamajek estimate that the system is much more extensive with a total of 37 rings.

"The details that we see in the light curve are incredible," Kenworthy said in the same statement. "The eclipse lasted for several weeks, but you see rapid changes on time scales of tens of minutes as a result of fine structures in the rings. The star is much too far away [for us] to observe the rings directly, but we could make a detailed model based on the rapid brightness variations in the starlight passing through the ring system."

Typically, when an exoplanet crosses in front of its host star, the effect is tiny. A Jupiter-like planet, for example, might block 1 percent of a sun-like star's light, producing an effect comparable to a mosquito flying in front of a flashlight a few thousand kilometers away from the observer. But in this case, the rings block as much as 95 percent of the star's light.

Evidently, the rings are massive. By comparison, "if you were to grind up the four large Galilean moons of Jupiter into dust and ice and spread out the material over their orbits in a ring around Jupiter, the ring would be so opaque to light that a distant observer that saw the ring pass in front of the sun would see a very deep, multiday eclipse," Mamajek said.

The data even show a clear gap that is 0.4 astronomical units (37 million miles) away from the super-Saturn. "One obvious explanation is that a satellite formed and carved out this gap," said Kenworthy. "The mass of the satellite could be between that of Earth and Mars."

Earth-size exomoons might prove to be promising abodes for habitable life. Although astronomers have started digging through the wealth of data collected by NASA's Kepler space telescope in search of their presence, none have shown up yet. But the case of J1407b has potential and may shed light on both exomoons and "exorings."

Still, the relationship between moons and rings remains a mystery. Despite the fact that half of the planets in the Earth's solar system have rings, astronomers have yet to fully understand how these bands are created and maintained. Last year, astronomers even spotted a distant asteroid with rings, for the first time.

Rings might be ancient, having formed with the planet itself. Or they might be relatively new, created from the debris of objects that fell toward the planet. Or maybe they form and then quickly disintegrate into moons. [See amazing photos of Saturn's rings]

Exoring model for J1407b from Matthew Kenworthy on Vimeo.

The team thinks that the third scenario might be the most likely one in this case. Kenworthy and Mamajek expect that the rings will become thinner in the next several million years and eventually disappear as moons form from the material in the disks.

"The planetary science community has theorized for decades that planets like Jupiter and Saturn would have had, at an early stage, disks around them that then led to the formation of satellites," said Mamajek. "However, until we discovered this object in 2012, no one had seen such a ring system. This is the first snapshot of satellite formation on million-kilometer scales around a substellar object."

So maybe Saturn need not worry. In millions of years J1407b's rings will be a thing of the past, and it will regain its crown.

The ring study has been accepted for publication in the Astrophysical Journal.