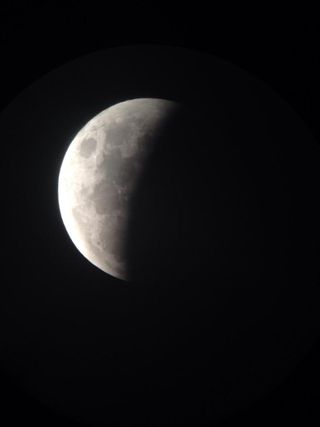 The moon is seen in mid-eclipse on Oct. 8, 2014 in this photo from the Adler Planetarium in Chicago, Illinois. The image was captured at 4:50 a.m. CDT as the moon neared the peak of a total lunar eclipse, the second of 2014.
(Image: © Adler Planetarium)

A total lunar eclipse is set to rise above people across a large swath of the world early Wednesday (Oct. 8). Weather permitting, people in North America, Australia, western South America and parts of East Asia will be able to see the total lunar eclipse. Sometimes, when the moon dips into Earth's shadow during an eclipse, the natural satellite takes on a coppery-red color, leading some people to dub it a "blood moon." The eclipse should reach totality just before sunrise at about 6:25 a.m. EDT (1025 GMT) on the east coast of the United States. Watch the Live Webcast.

'Blood Moon' Photos: 1st Views of the Total Lunar Eclipse
See the first photos of the amazing total lunar eclipse here. If you snap an amazing picture of the Oct. 8 total lunar eclipse, you can send photos, comments and your name and location to managing editor Tariq Malik at spacephotos@space.com.

Blood Moon Weather: Total Lunar Eclipse Forecast
What will your weather be like when the total lunar eclipse rises Wednesday?

Capturing the Blood Moon: Views from a Lunar Eclipse Photographer: Op-Ed
Learn how you can photograph the total lunar eclipse from an astrophotographer.

How to Watch the October 2014 'Blood Moon' Total Lunar Eclipse
See our step-by-step guide of the Oct. 8 total lunar eclipse as it changes from a full moon to a so-called "blood moon" at its peak.

Total Lunar Eclipse On Wednesday Will Be a Rare 'Selenelion'
For observers on the east coast of the United States, the total lunar eclipse might also be a rare "selenelion" - a celestial event in which the setting, eclipsed full moon and rising sun can be seen in the same sky.

See Uranus with a Shadowy Full Moon During Total Lunar Eclipse
Learn how to see Uranus shining during the total lunar eclipse on Oct. 8.

Total Lunar Eclipse Next Week Will Turn the Moon Blood Red: Video
NASA scientiststs think that the moon might turn a coppery-red color during the total lunar eclipse. The red hue of the moon during an eclipse is created by the way light reflects on the natural satellite.

October Skywatching: Lunar & Solar Eclipses, a Meteor Shower and More
October will bring a total lunar eclipse, partial solar eclipse and more for stargazers. Here's what to look for.

How to Observe the Moon: Infographic

Lunar Eclipses: What Are They; When is the Next One?

On The Moon For A Lunar Eclipse? | Artist Impression