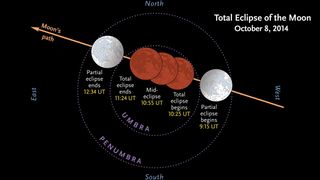 Editor's Update for Oct. 8 at 9 a.m. ET: The total lunar eclipse is over, but you can see some amazing images of the celestial site here: 'Blood Moon' Photos: Total Lunar Eclipse Thrills Skywatchers.You can also read our complete eclipse coverage here. For photography tips, read: Capturing the Blood Moon: Views from a Lunar Eclipse Photographer (Op-Ed).

The moon will pass through Earth's shadow early Wednesday morning (Oct. 8) and no enthusiastic skywatcher should ever miss a total eclipse of the moon. The spectacle is often more beautiful and interesting than one would think. During the time when the moon is entering, and later emerging from, Earth's shadow, some secondary phenomena may be overlooked.

Wednesday's total lunar eclipse will be visible, weather permitting, from much of North America, as well as to observers in Australia, western Asia and across the Pacific Ocean. As a veteran of 14 eclipses of the moon, I know that to get the best out of a lunar eclipse, you should know the major stages of the event. To help you prepare for the eclipse, here is a step-by-step chronology of some of the things you can expect to see, weather permitting.

If you can't see the total eclipse from your own backyard, you can catch it live online via two webcasts from NASA and the Slooh Community Observatory. The NASA webcast — which will feature a chat with the space agency's moon experts — begins at 3 a.m. EDT (0700 GMT) on Oct. 8, with Slooh's starting at 5 a.m. EDT (0900 GMT). You can watch both lunar eclipse webcasts on Space.com, or directly through Slooh and NASA.[How to See the Total Lunar Eclipse (Visibility Maps)]

Wednesday's lunar eclipse will be followed closely by sunrise for some observers, leading to a rare "selenelion" event. It is also the second of four consecutive total eclipse of the moon (the first occurred last April), and is part of a so-called lunar eclipse tetrad.

Since not every eclipse is the same, it's possible that not all of these events will occur, but many will. Those who know what to look for have a better chance of seeing it! The chart here lists the times to see the major stages of Wednesday's eclipse, based on different time zones for North America. The dashes in the chart indicate that the moon has dropped below the horizon and is no longer visible for observers in the designated time zone.

Stages of the total lunar eclipse in Pacific Time:

Stage 1 @ 1:15 a.m. PDT: Moon enters penumbra — The shadow cone of the Earth has two parts: a dark, inner umbra, surrounded by a lighter penumbra. The penumbra is the pale outer portion of the Earth's shadow. Although the lunar eclipse begins officially at this moment, this is, in essence, an academic event. You won't see anything unusual happening to the moon — at least not just yet. The Earth's penumbral shadow is so faint that it remains invisible until the moon is deeply immersed in it. We must wait until the penumbra has reached roughly 70 percent across the moon's disc to be able to discern the Earth's shadow. For about the next 40 minutes, the full moon will continue to appear to shine normally, although with each passing minute, it will be progressing ever deeper into the Earth's outer shadow.

Stage 2 @ 1:56 a.m. PDT: Penumbral shadow begins to appear — Now, the moon has progressed far enough into the penumbra so that it should be evident on the moon's disc. Start looking for a very light shading to appear on the moon's upper-left portion. This will become increasingly evident as the minutes pass; the shading will appear to spread and deepen. Just before the moon begins to enter the Earth's dark umbral shadow, the penumbra should appear as an obvious smudge or tarnishing of the moon's left portion.

Stage 3 @ 2:14 a.m. PDT: Moon enters the umbra — The moon now begins to cross into the Earth's dark central shadow, called the umbra. A small, dark scallop shape begins to appear on the moon's upper-left-hand limb. The partial phases of the eclipse begin, the pace quickens and the change is dramatic. The umbra is much darker than the penumbra and fairly sharp-edged. [Oct. 8 Total Lunar Eclipse Explained (Video)]

As the minutes pass, the dark shadow appears to slowly creep across the moon's face. At first, the moon's limb may seem to vanish completely inside of the umbra, but much later, as it moves in deeper, you'll probably notice it glowing dimly orange, red or brown. Notice also that the edge of the Earth's shadow projected on the moon is curved. Here is visible evidence that the Earth is a sphere, as deduced by Aristotle from Iunar eclipses he observed in the 4th century B.C. It's almost as if a dimmer switch were slowly being turned down on the surrounding landscape, as deep shadows of a brilliant moonlit night begin to fade away.

Stage 4 @ 3:07 a.m. PDT: 75-percent coverage — With three-quarters of the moon's disc now eclipsed, the part of it that is immersed in shadow should begin to light up very faintly, similar to a piece of iron heated to the point where it just begins to glow. It now becomes obvious that the umbral shadow is not complete darkness.

Using binoculars or a small telescope, its outer part is usually light enough to reveal lunar seas and craters, but the central part is much darker, and sometimes no surface features are recognizable. Colors in the umbra vary greatly from one eclipse to the next. Reds and grays usually predominate, but sometimes browns, blues and other tints are encountered.

Stage 5 @ 3:21 a.m. PDT: Less than 5 minutes to totality — Several minutes before (and after) totality — the point at which the moon's disc is completely eclipsed — the contrast between the remaining pale-yellow sliver and the ruddy-brown coloration spread over the rest of the moon's disc may produce a beautiful phenomenon sometimes referred to as the "Japanese Lantern Effect."[How to Photograph the Lunar Eclipse]

Stage 6 @ 3:25 a.m. PDT: Total eclipse begins — When the last of the moon enters the umbra, the total lunar eclipse begins. How the moon will appear during totality is not known. Some eclipses are such a dark gray-black that the moon nearly vanishes from view. At other eclipses, it can glow a bright orange. The reason the moon can be seen at all when it's totally eclipsed is that sunlight is scattered and refracted around the edge of the Earth by our atmosphere. To an astronaut standing on the moon during totality, the sun would be hidden behind a dark Earth outlined by a brilliant red ring consisting of all the world's sunrises and sunsets. [Amazing Total Lunar Eclipse Photos of April 2014]

The brightness of this ring around the Earth depends on global weather conditions and the amount of dust suspended in the air. A clear atmosphere on Earth means a bright lunar eclipse. If a major volcanic eruption has injected particles into the stratosphere during the previous couple of years, the eclipse is very dark. As of this writing, three significant volcanic eruptions have occurred pretty recently — Mount Ontake in Japan, Mount Mayon in the Philippines and Mount Bardarbunga in Iceland — so it will be interesting to see if this eclipse will appear a bit darker than normal.

Stage 7 @ 3:55 a.m. PDT: Middle of totality — At this point, the moon is shining anywhere from 10,000 to 100,000 times fainter than it was just a couple of hours ago. Since the moon is moving to the north of the center of the Earth's umbra, the gradation of color and brightness across the moon's disc should be such that its lower portion should appear darkest, with hues of deep copper or chocolate brown. Meanwhile, its upper portion — the part of the moon closest to the outer edge of the umbra — should appear brightest, with hues of reds, oranges and even perhaps a soft bluish-white.

Observers away from bright city lights will notice many more stars than were visible earlier in the night. The moon will be in the constellation of Pisces, with the faint planet Uranus positioned roughly a half degree to the moon's left and readily seen with binoculars. In the eastern United States, the moon will be setting as the sun is rising.

The darkness of the sky is impressive. The surrounding landscape has taken on a somber hue. Before the eclipse, the full moon looked flat and one-dimensional. During totality, however, it will look smaller and three-dimensional, like some weirdly illuminated ball suspended in space.

Before the moon entered the Earth's shadow, the temperature on its sunlit surface hovered at 266 degrees Fahrenheit (130 degrees C). Since the moon lacks an atmosphere, there is no way that this heat can be stopped from escaping into space as the shadow sweeps by. Now, in shadow, the temperature on the moon has dropped to minus 146 F (minus 99 C) — a drop of 412 F (229 C) in less than 90 minutes!

Stage 8 @ 4:25 a.m. PDT: Total eclipse ends — The emergence of the moon from the shadow begins. The first small segment of the moon begins to reappear, followed again for the next several minutes by the Japanese Lantern Effect.

Stage 9 @ 4:42 a.m. PDT: Seventy-five percent coverage — Any vestiges of coloration within the umbra should be disappearing now. From here on, as the dark shadow methodically creeps off the moon's disc, it should appear black and featureless. For parts of the Great Lakes, Midwest, Tennessee and Mississippi Valley, the moon will either have set or will be approaching its setting as the sun comes up in the East.

Stage 11 @ 5:51 a.m. PDT: Penumbra shadow fades away — As the last, faint shading vanishes off the moon's right portion, the visual show comes to an end.

Stage 12 @ 6:33 a.m. PDT: Moon leaves penumbra —The eclipse "officially" ends, as the moon is completely free of the penumbral shadow.

Editor's Note: If you snap an amazing picture of the Oct. 8 total lunar eclipse, you can send photos, comments and your name and location to managing editor Tariq Malik at spacephotos@space.com.