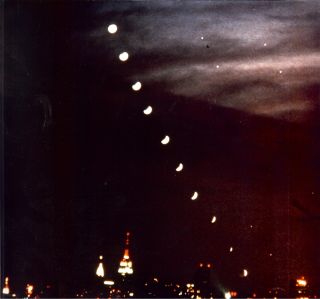 Night Sky columnist, Joe Rao, took this composite photo of the Dec. 30, 1982, total lunar eclipse. The 1982 eclipse could be similar to the Oct. 8, 2014, eclipse. The images of the eclipse were shot from Jones Beach West End Field #2. The next night, Rao imaged the NYC skyline from Ferry Point Park in the Bronx.
(Image: © Joe Rao/Space.com)

Weather prospects for Wednesday's total lunar eclipse are great for observers hoping to catch a glimpse of the "blood moon" from around the United States.

The moon will start moving into Earth's dark shadow, signaling the start of the partial phase of the eclipse, at 5:15 a.m. EDT (0915 GMT) on Oct. 8. The total phase of the eclipse will begin about 70 minutes later. The only regions of the United States where poor total lunar eclipse viewing conditions are expected are in New England, the central Rockies and the Southwest desert.

The moon will set during the total phase for those near and along the Atlantic coast. Farther west, as the moon sets, it will be emerging from the umbra, the innermost and darkest part of the Earth's shadow. If weather does get in the way of your view of the eclipse, you can watch three lunar eclipse webcasts featuring live views of the celestial site on Space.com. [How to See the Total Lunar Eclipse (Visibility Maps)]

Skywatchers viewing the eclipse from the ground might be able to see the moon turn a coppery shade of red during totality Wednesday. This feature has led some to call the eclipsed moon a "blood moon."

At eclipse time in the Northeast region of the United States, a cold front will be moving across eastern New York State and adjacent western New England. Ahead of the cold front, a swath of clouds and showery rains is expected. There is even a chance of a few isolated strong-to-severe thunderstorms over parts of southern New England. Such stormy conditions will almost certainly wipe out any chance of seeing the eclipse. Farther south and west, clouds might break just in time to allow a view of the shady drama in New York, Philadelphia and Washington, D.C., although prospects are still touch-and-go.

Over the western states, the remnants of what was once tropical cyclone Simon will be situated over the northern Baja Peninsula. Tropical moisture from what's left of Simon will fall as rain showers over southeast California, virtually all of Arizona and parts of western New Mexico.

Meanwhile, cloudiness will be more widespread and is expected to cover most, if not all, of Utah, Colorado, Arizona and New Mexico. Cloudiness may also plague an eastern slice of Nevada and perhaps the Texas-Oklahoma panhandle region.

Some localized trouble spots might also include the immediate Pacific coasts of Washington state and Oregon (low clouds from the ocean), some mid-to-high-level clouds and isolated showers over central and south Florida, and cloudiness and spotty showers over the upper peninsula of Michigan. There could also be broken-to-overcast skies near and along a stationary weather front draped across parts of Arkansas, Tennessee and northern sections of Mississippi, Alabama and Georgia.

Elsewhere around the country, the weather should generally cooperate for eclipse viewing.

Editor's Note: If you snap an amazing picture of the Oct. 8 total lunar eclipse, you can send photos, comments, and your name and location to managing editor Tariq Malik at spacephotos@space.com.