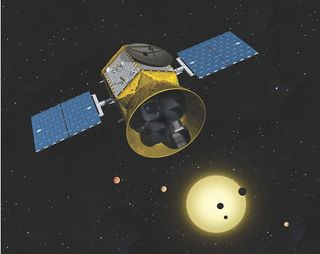 Set to launch in 2017, NASA's Transiting Exoplanet Survey Satellite (TESS) will monitor more than half a million stars over its two-year mission, with a focus on the smallest, brightest stellar objects.

During its observations, TESS is expected to find more than 3,000 new planets outside of our solar system, most of which will be possible for ground-based telescopes to observe.

"Bright host stars are the best ones for follow-up studies of their exoplanets to pin down planet masses, and to characterize planet atmospheres," said TESS principal investigator George Ricker, of the Massachusetts Institute of Technology's Kavli Institute for Astrophysics, in an email. [The Search for Another Earth (Video)]

"TESS should be able to find over 200 Earths and super-Earths — defined as being twice the size of Earth," said Peter Sullivan, a physics doctoral student at MIT. "Ten to 20 of those are habitable-zone planets.”

Sullivan, who works with Ricker on TESS, led an analysis of the number of planets TESS would likely find based on the number and types of planets found by NASA's Kepler mission. Kepler focused on a single region of the sky and studied all transiting planets within it. TESS, on the other hand, will examine almost the entire sky over its two-year mission, but capture only the brightest stars, many of which are expected to host terrestrial planets.

A bounty of Earth-sized extrasolar planets

TESS will travel around Earth in a highly elliptical orbit that will range as distant as the moon. Along the way, it will use four cameras to observe a swatch of sky running from the celestial equator to the poles. TESS will observe each swatch for approximately a month before switching to the next region.

Dressing worked on a second model, based on Sullivan's work, that predicts the number of planets near Earth that pass between the sun and their host star. [The Strangest Alien Planets]

"We predicted there should be about 100 transiting planets within 20 parsecs [about 65 light-years], and that roughly three of them should lie within the habitable zone of their host stars," Dressing said.

Not all of these planets will be detectable to the TESS mission. According to Dressing, the new telescope will be most sensitive to small planets orbiting stars 20 to 50 percent the size of our sun.

Because TESS focuses on small, bright stars, it will be sensitive to Earth-sized planets and the massive terrestrial planets known as super-Earths. Like Kepler, TESS will measure the dip in light that occurs when a planet passes between its star and Earth, known as its transit. These dips will be larger and easier to spot for Earth-sized planets, which should dominate the population of small stars. Larger planets will also be visible, though they are expected to be less common around TESS's targets.

"A lot of Jupiter-sized planets have been detected from the ground, however, so we're more excited about TESS finding small planets that can efficiently be found from space," Sullivan said.

A wealth of knowledge

One of the most exciting things about the upcoming bonanza of planets TESS should find is the ability to study them with ground-based telescopes. Such observations will allow scientists to learn more about the planets, including characterizing their masses and studying their atmospheres.

"Some of the planets detected by Kepler orbit stars that are too faint for ground-based follow-up observations," Dressing said.

Unable to study the planets from the ground, scientists cannot calculate their masses or understand more about the stars they orbit. By targeting bright stars, TESS seeks to overcome these challenges.

"When observing bright stars, astronomers can use ground-based instruments to make very accurate measurements of the sizes, temperatures and masses of the stars hosting the planets," Dressing said.

TESS will also target stars ideal for NASA's James Webb Space Telescope (JSWST) to observe. While TESS will make the initial brief detections, JWST will allow for the more detailed follow-up that will provide greater insights about the stars and their planets. The mission is expected to launch a little over a year after TESS, allowing for a wealth of potential targets.

"TESS will observe a portion of the sky for about 300 days," Ricker said. "This special area is the 'sweet spot' for the JWST mission."

According to Sullivan's model, TESS is expected to find between 10 and 20 Earths and super-Earths in the habitable zone of their stars. Sullivan's simulation, which compared the changes in brightness of the expected number of transiting planets to a model of TESS's sensitivity, used a broad definition of the habitable zone, where a planet would be capable of hosting water on its surface.

To formally detect a planet, Sullivan said, TESS must observe two transits of a planet, which will enable scientists to locate the planet again and study it from the ground. The researchers won't toss out single-detection sources, however. The most interesting may become targets for other telescopes.

"TESS will find some interesting long-period planets with only one detection, but it will just take more resources to confirm these detections," Sullivan said.