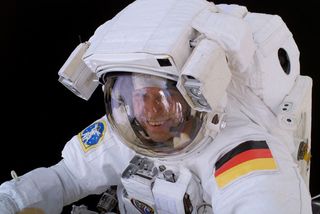 German astronaut Thomas Reiter, representing the European Space Agency (ESA), pauses during an Aug. 3, 2006 spacewak for a photo by his Expedition 13 crewmate and fellow spacewalker Jeffrey Williams. Reiter has spent more time in space than any other ESA astronaut.
(Image: © NASA.)

Germany hasa new spaceflight champion in ThomasReiter, who is now setting a daily record aboard the International SpaceStation (ISS) for the most time spent in space by a European Space Agency (ESA)astronaut.

Now morethan one month into his 175-day mission aboard the ISS, Reiter has passed the 212-daymark of career spaceflight time while orbiting the Earth as a flight engineer with thestation's Expedition13 crew. The milestone pushed Reiter ahead of former ESA spaceflightrecord-holder Jean-Pierre Haignere, of France, who spent209 days, 12 hours, 25 minutes and 11 seconds in space.

"At the endof your mission, you will have spent [nearly] one year in space," Jean-Jacques Dordain, director-generalfor the ESA, told Reiter in a congratulatory message. "With this outstandingexpertise and experience you - as our 'highest flying' colleague - symbolizeEurope's commitment to space "We are extremely proud of your achievements and wishyou the best of luck in your remaining time up there."

Reiterfirst launched into space in 1995 during the ESA's EuroMir 95 mission to Russia'sspacestation Mir. During that flight, Reiter spent 179 days in orbit and stagedtwo spacewalks - hisspace agency's first - on top of his experiment duties.

On July 6,2006, Reiter became the first German astronaut to board theISS and is the first long-duration spaceflyer from Europe to serve aboardthe orbital laboratory. His Astrolab mission includes more than 20 researchexperiments that range from life sciences and biology to astrophysics andtechnology.

Last week,Reiter tucked another first under his belt as he became the firstEuropean astronaut to perform a spacewalk from the ISS, ESA officials said,adding that NASA astronaut JeffreyWilliams led the extravehicular work. Russian cosmonaut and Expedition13 commander Pavel Vinogradov remained inside the ISS during the spacewalk.

"I can tellyou that every second of training is really worth the effort just to get uphere," Reiter told Dordain in a recent space-to-ground call. "It's a greatplace to be."

Theall-time spaceflight record sits securely in the hands of Russian cosmonaut SergeiKrikalev, who spent a total of 803days in space - more than two years of his life altogether - during aseries of six spaceflights beginning with a November 1988 launch toward thespace station Mir and ending with 2005's Expedition11 mission to the ISS.

The U.S.career spaceflight record is currently held by NASA astronaut MichaelFoale - a native of England - who has flown six space missions and rackedup 374days in orbit before ending the successful Expedition 8mission with an April 2004landing.