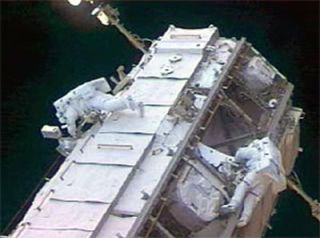 Twoastronauts primed the InternationalSpace Station (ISS) for futureconstruction and installed a vital safety sensor to its exterior Thursdayduring a speedy spacewalk hundreds of miles above Earth.

ISSExpedition 13 flight engineers JeffreyWilliams and ThomasReiter spent nearly six hours toiling outside the station while theircommander - Russian cosmonaut PavelVinogradov - worked alone inside the orbital laboratory. They worked sofast that flight controllers at NASA'sJohnson Space Center (JSC) in Houston ran out of spacewalking tasks for them.

"Thomas,it feels good when you get to a point where they run out of things for us todo," said Williams, a NASA astronaut, as the ISS flew some 215 miles (346kilometers) above Earth.

But despitetheir speed, laughter and jokes - of which there were more than a few - theExpedition 13 astronauts accomplishedseveral pivotal tasks to ensure spacewalkersafety and prepare the ISS fortwo visiting NASA shuttles, the first of which is set tolaunch no earlier than Aug. 27.

Of all thetasks facing Williams and Reiter, their primary goal was the installation of aso-called FloatingPotential Measurement Unit (FPMU) on the tip of the station's starboard -or right side - truss.

The sensorwill monitor the electric potential of ISS solar arrays and allow flightcontrollers to safeguard future spacewalkers from dangerous electricarcs or shocks when working near the area.

Theastronauts also spent a good amount of time working with the station's radiatorand cooling systems to install a new motor controller, replace a brokencomputer, and attach ammonia-carrying jumper lines on the starboard truss.

The workwill help spacewalking NASA astronauts activate the cooling system during the agency'sSTS-116 shuttle mission slated to fly in December.

NASA commentatorKylie Clem later said flight controllers verified that all of the newlyinstalled equipment was online and functioning well.

One ofReiter's final planned tasks included recording 17 minutes of infraredvideo to test a new camera's ability to detect damage to the reinforcedcarbon carbon panels used in space shuttle heat shields. A similartest was performed during a July 12spacewalk during NASA's STS-121shuttle mission to the ISS.

"This iswhat I call some kind of cool," said Reiter, who wore the flag of his nativeGermany on his spacesuit, while using the camera. He is the European SpaceAgency's (ESA) first long-duration ISS astronaut.

At onepoint, Williams and Reiters were more than 90 minutes ahead of schedule, which allowedthem to run down several get-ahead tasks originally slated for futurespacewalks.

Williams retrieveda broken navigation antenna and installed a new light to illuminate EVA worksites at night while Reiter outfitted NASA's Destiny lab with a new vent to aidvacuum experiments inside the module. They also retrieved equipment thatconnects hardware to the station's exterior, as well as photographed airlockscratches and themselves during their free time.

Oneforward-looking task included the relocation of two foot restraints, andrepositioning of a third, which will be used in three planned spacewalks forNASA's STS-115shuttle mission.

Thatspaceflight, set to launch aboard NASA'sAtlantis orbiter no earlier than Aug. 27, will deliver a new set of solararrays and two truss segments to the ISS.

Today's excursionwas the third career spacewalk for both Williams and Reiter. Williams has spent19 hours and nine minutes working outside a spacecraft, while Reiter clockedout with 14 hours and 15 minutes of orbital work.

Thespacewalk was also the 69th extravehicular activity to support theISS and the 41st staged from the station itself.

During thespacewalk, Williams marveled at an orbital sunrise and observed Tropical StormChris near the Caribbean, noting that it looked less organized from orbit thanit did on Wednesday. At one point, his camera - which he used liberally -appeared to run out of batteries.

"It'snice out here isn't it," Williams asked Reiter as they climbed along thestation's exterior.