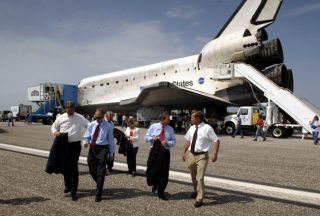 CAPECANAVERAL, Fla. - The space shuttle Discovery is in near pristine conditionafter a flawless Mondaylanding under a cloud-covered Florida sky.

"Yes, Ithink the conclusion is that the shuttle is back," NASA's shuttle program chiefWayne Hale said. He added that NASA's Atlantis orbiter is slated to launch oneof the most complicated ISS construction missions in just six week's time. "Wehave the team that is now practiced and battle-hardened ready to go to thatwith the proper requisite experience to make sure that we will not let anystone go unturned."

Discovery'swheels touched down here at NASA's Kennedy Space Center (KSC) at 9:14 a.m. EDT(1314 GMT) after a 13-daymission to deliver a new crewmember to the ISS, resupply and repair thestation, as well as test new concepts for shuttle heat shield safety.

Thesuccessful mission - commanded by veteran NASA shuttle flyer StevenLindsey - opens the gate for the no less than 15 future orbiter missions tobuild out the ISS by Sept. 30, 2010.

NASA chiefMichael Griffin said today that external tank modifications aimed at increasingshuttle flight safety following the Columbia accident, as well as improved heatshield inspection techniques, appear to have been a stunning success. But NASAengineers will have to complete a comprehensive analysis before a finalevaluation can be made, he added.

"This isthe cleanest orbiter anybody remembers seeing," Griffin said. "What's behindthat, we've got to dig in and look. Honestly, when we know, we'll tell you."

While engineersstudy the results of Discovery's spaceflight, the STS-121 astronauts themselvesare meeting with their families after a hectic spaceflight.

"I wouldgive Steve a perfect 10 today," NASA reentry flight director Steve Stitch saidof STS-121 commander Steven Lindsey's landing. "He did a superb job puttingDiscovery right down exactly where we thought with our analysis that he wouldland. It was a perfect landing."

For NASAlaunch director Michael Leinbach, Discovery's smooth landing provided a closureof sorts. The touchdown marked the first successful KSC shuttle landing sincethe loss of Columbia, which was heading towards the Shuttle Landing Facilityhere when it broke apart over Texas.

"Columbia'slanding day was a horrible day," Leinbach said. "Today was a great day."