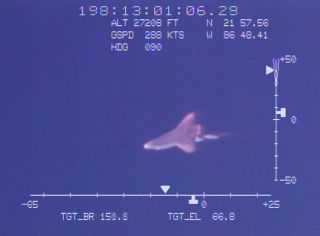 To cameras tuned to the visible range of the light spectrum, Discovery’s STS-121 reentry on July 17, 2006 looked like this just before its successful landing.
(Image: © NASA/Langley Research Center.)

The space shuttle Discovery'smission may be over, but NASA is still hard at work evaluating a set of infraredtools used during the flight to help predict whether an orbiter's heat shieldis clear to return astronautsback home safely.

The videohas given NASA scientists their first complete look at how the scorchingtemperatures of reentry are distributed across a shuttle's belly at supersonic speeds,something only hinted at in previous ground-based attempts.

"It's areally quite a spectacular image," said Bob Blanchard, a lead senior scientistat George Washington University who participated in the STS-121 and earlier shuttleheat shield studies. "It was something we kind of dreamed about when we weredoing this low-altitude stuff earlier."

A team ofengineers at NASA's Langley Research Center in Hampton, Virginia are nowworking to match the infrared video against data from computer models and windtunnel tests to determine how close their predictions were to Discovery'sactual reentry.

"It's notjust about good science," said Tom Horvath, a senior research engineer for NASAwith Langley's aerothermodynamic branch. "Being able to reduce the uncertaintyin this prediction tool ... that has a huge impact on whether we [see] any damageon a future flight and clear it to enter as-is or recommend a repair."

"It cameoff, I think, better than we had expected," Michael Gazarik, spacewalk infraredcamera lead at Langley for the STS-121 mission, told SPACE.com. "Theimagery looks good, the data looks good, we've got a lot of data."

BeforeDiscovery plunged through the Earth's atmosphere, NASA engineers already had a targetto seek out with infrared cameras during the orbiter's reentry.

A small bitof ceramic cloth--known as a gap filler--was juttingfrom between two of the thousands of black, heat-resistant tiles guarding theshuttle's belly against temperatures of up to 2,300 degrees Fahrenheit (1,260degrees Celsius) during reentry.

Wind tunneltests and computermodeling determined that the torn, off-kilter gap filler would interruptthe aerodynamic flow aft of its location--near the orbiter's rear--and causehotter temperatures downwind, yet notpose a danger to the shuttle. Engineers were eager to see that heatingprocess in action.

"This [prediction]tool that we've developed is based on a very limited set of flight data,"Horvath said, adding that Discovery's belly carries only five temperaturesensors--or thermocouples--in all. "We need more flight data."

A U.S. NavyP-3 Orion aircraft watched Discovery as it passed below an altitude of about 180,000feet (54,864 meters) at speeds about Mach 13, while a high-altitudeobservatory (HALO) aircraft recorded the spacecraft as it slowed from Mach 9 toMach 7 about 150,000 feet (45,720 meters) above Earth. A third aircraftdid not catch the spacecraft's reentry. Mach 1 is the speed of sound and is about760 miles (1,223 kilometers) per hour at sea level.

"None ofthe air crews even saw the vehicle as it went past," said Marty Ross, of thefirm Aerospace Corp., who coordinated air-based reentry observations for NASA. "Itwas all done with the [infrared] cameras."

Engineersare now working to develop a temperature map to match the infrared data.Meanwhile, post-landing inspections found that Discovery's primary gap fillerprotrusion--therewere several--was worndown to a nub and left a clearpath from the apparent higher temperatures down the orbiter's aft.

Discovery'sSTS-121 mission also proved that spacewalkers could use a handheld infraredcamera to scan vital areas of an orbiter's heat shield--its nose cap and wingleading edges--for signs of subsurface damage that the human eye may notcatch.

Covered ina composite material known as reinforced carbon carbon (RCC), those heat shieldareas are subjected to the most extreme temperatures experienced by an orbiterduring reentry. Astronauts currently use boom-mounted laserand visible light cameras to examineheat shield surfaces for damage in-flight, but the new tool--known as an EVAIR camera--would search for cracks or voids between layers of RCC materialthat could come loose during reentry.

"Theoperation of the camera seemed to go fine," Gazarik said, adding that testingthe camera was the tool's sole reason for being aboard Discovery. "There's alot of things could have gone wrong and I think it was a very good day for us."

NASAengineers said analysis from both infrared tests will continue over the nextfew weeks, with some data to be presented at a Flight Readiness Review meetingfor the agency's STS-115mission currently set to launch aboard Atlantis no earlier than Aug. 28.

"Ultimately,we're preparing for the next flight on the books," Horvath said.