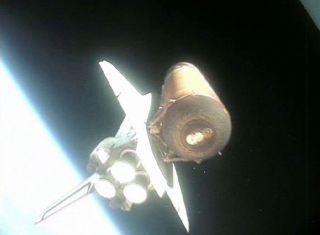 This still image is taken from video recorded by one of four new cameras mounted to the solid rocket boosters for NASA's space shuttle Discovery during its July 4, 2006 launch of the STS-121 mission.
(Image: © NASA.)

JohnShannon, NASA's deputy space shuttle program manager, said that five of the sixheat shield sites examined by Discovery's astronaut crew during Friday'sup-close inspections have been cleared of any concerns, and that the orbiter'sthermal protection system is no longer classified as "suspect" based on theresults.

One smallprotruding gap filler and a dinged thermal blanket between Discovery's twocenter-most windows are all that stand between the orbiter's heat shield and aclean bill of health, shuttle officials added.

The darkareas or blotches seen along the shuttle's right wing and nose cap pre-dockingphotographs taken by the Expedition 13 crew aboard the International SpaceStation (ISS) appear to be little more than drips of hydraulic fluid, leftoverremnants from the motors that blast the orbiter's solid rocket boosters freeduring launch or other surfacematerial, Poulos added.

Analysis isstill underway to determine whether a small gap filler jutting out from betweentwo belly tiles near one of Discovery's aft external tank umbilical doors willpresent a heating concern during reentry. The gap filler appears torn in someareas and juts a maximum of about 1.04 inches (2.6 centimeters) above thesurrounding tiles, but is expected to fold over during reentry and not pose alarge threat, NASA officials said.

Additionaltests are also underway over the damaged thermal blanket between Discovery'sforward windows to determine whether the forces expected during reentry couldrip the material free and cause a debris concern along the vehicle's aft.

"Of coursewe still have to do the homework...to clear [Discovery] for the nominal end of mission," Shannon said. "We do expect that to be tomorrow."

Shannon added that video from four newcameras mounted to Discovery's twin solid rocket boosters has been recovered.The video is expected to deliver more detail on any foam shedding from theshuttle's external tank during its July 4 launch.

Whileimagery from Discovery's orbital boom continues has proven vital to determine theshuttle's health, the boom itself went through a rigorous test during aseven-hour and 31-minute spacewalk.

The testswere aimed at determining whether the boom would prove stable enough to useduring the delicate operations of a heat shield repair. Spacewalk officialssaid the robotic arm-boom combination's oscillations damped out much quicker -15 to 20 seconds rather than the anticipated minute or more - than theyexpected.

"It wasabove and beyond what the engineers and us thought how the arm would perform,"said Tony Ceccacci, lead shuttle flight director for Discovery's STS-121mission. "That's given us very good confidence in utilizing this whole platformfor [heat shield] repair."