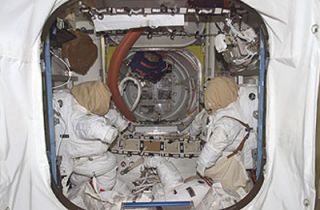 Like sentinels guarding a door, two NASA spacesuits stand ready inside the International Space Station's Quest airlock where Expedition 13 astronauts Jeffrey Williams and Thomas Reiter will don them and step outside the outpost on Aug. 3, 2006.
(Image: © NASA.)

Two astronautsare set to step outside the International SpaceStation (ISS) today with only spacesuits for protection against the harsh vacuumof their surroundings during more than six hours of orbital work.

"Thecontents of this EVA [extravehicular activity] will be to install a couple ofsystems outside the station," Reiter, the first long-duration astronaut fromGermany and the European Space Agency (ESA) to serve aboard the ISS, told ESAofficials during a recent space-to-ground phone call.

Expedition13 commander PavelVinogradov will remain inside the ISS during today's planned spacewalk,marking a first time a human has stayed aboard while others worked outsidesince 2003. ISS crews were reduced to two-astronaut teams following NASA's loss of the shuttle Columbia and itscrew in 2003, prompting two-personspacewalks that left the ISS empty and under control by mission controllerson Earth.

Vinogradovwill not have to shut hatches or perform other precautionary work performedduring the reduced crew spacewalks, NASAofficials have said. He will, however, be able to help his spacewalkingcrewmates don their orbital work clothes, they added.

"It willmeasure the electric potential that will accumulate from the solar arrays ofthe station," Reiter said of the new tool.

NASA trackssolar array electric potential because they can build up charge in flight andpossibly spawn arcs that couldshock nearby ISS equipment or a spacewalking astronaut. Earlier this year,Expedition 12 commander Bill McArthur tossed adevice similar to the FPMU into space after other spacewalker photographyfound that its bolts were loosening their grip on the ISS.

Other majortasks include a series of repairs and maintenance to equipment supporting thestation's cooling system, the set up of two new, suitcase-sized materialexposure experiments on the orbital laboratory's hull, and a photography experimentusing an infrared video camera. [Click herefor a detailed look at the upcoming Expedition 13 spacewalk.]

"We've beenworking hard with this crew for the last year on preparing for this EVA," PaulBoehm, NASA's Expedition 13 lead spacewalk officer, said during a pre-EVAbriefing. "[It] represents a true mix of ISS experiments and maintenance."

Today's plannedEVA will mark the third career spacewalk for both Williams, a NASA astronaut servingas science officer during Expedition 13, and Reiter.

Williamscan be identified by the red stripe emblazoned on his NASA spacesuit and willlead the spacewalk as EV-1.

Reiter, inan all-white suit, is designated EV-2. His EMU spacesuit is the first to carrya German flag patch on its shoulder, NASA officials have said.