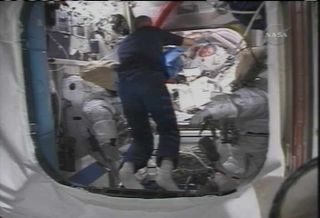 Two astronautsaboard the InternationalSpace Station (ISS) will don NASA spacesuits Friday to rehearse an upcomingspacewalk that will prepare their orbital laboratory for futureconstruction.

ISSExpedition 13 astronauts JeffreyWilliams and ThomasReiter will step into their U.S.-built Extravehicular Mobility Units (EMUs)as practice for an Aug. 3 spacewalk to ready the station's primary cooling systemfor activation during an upcoming NASA shuttle mission.

"This EVAconsists of many maintenance tasks...most of those are in support of the upcomingSTS-116 mission, which is the flight after next," said Dana Weigel, NASA's extravehicularactivity (EVA) flight director, during a Thursday mission briefing.

NASA'sSTS-116 shuttle flight is set to launch toward the ISS aboard the Discoveryorbiter on Dec. 14, just over three months after the planned Aug. 28 liftoff ofits predecessor STS-115aboard Atlantis, the space agency has said.

"This EVAnext week is very important to put us into a position to conduct all thoseflights," Shireman said of the 15 or so remaining shuttle missions to completethe ISS by 2010, when NASA's three-orbiter fleet is retired.

Williams, aNASA astronaut who arrivedon the ISS with Vinogradov on April 1, will serve as EV-1 during the upcomingspacewalk and don a red-striped spacesuit.

Reiter, thefirst long-duration ISS astronaut for the European Space Agency and Germany,will wear an all-white spacesuit as EV-2. He arrivedat the station aboard NASA's shuttleDiscovery on July 6.

Of the numeroustasks planned for Williams and Reiter during their upcoming spacewalk, the mostcritical are the installation of a new motor and replacement of a brokencontrol box for three radiators mounted to a swivel platform on the station'sstarboard side.

A duplicateradiator platform sits on the station's port side, though only one radiator oneither system is currently unfurled, NASA said.

The newmotor to be installed is one of two that allow the radiators' platform to rotateindependently of the ISS as the station orbits Earth. The control box- areplacement for a unit that failed in 2004 - will regulate radiator deployment andthe valves for the vital liquid ammonia that transports waste heat to theradiators themselves.

Weigel saidthe spacewalkers will also install a temporary cooling fluid line - known as ashunt jumper - to the starboard radiator system during the EVA.

"We want tomake sure the system is functioning properly," Weigel said of the station'sindependent starboard and port cooling systems, adding that only then can theradiators be filled with liquid ammonia.

A busyspacewalk, a larger crew

In additionto working on orbital cooling systems, Williams and Reiter will mount a newdevice - known as a Floating Potential Measurement Unit - to the Earth-facing endof the station's Starboard One (S1).

"This isgoing to provide a great view for the crew," said Paul Boehm, NASA's leadspacewalk officer for Expedition 13.

The newdevice will monitor the voltage potential that builds up as the outpost's solararrays generate power. A previous probe was tossed intospace last year after astronauts noticed that bolts securing it to the ISSwere loosening, prompting debris concerns.

If timepermits, they could retrieve a balky global positioning system antenna, set upa new light outside the ISS or install a vent for use during future experimentsinside NASA's Destiny laboratory, he added.

Next week'sEVA will mark the third career spacewalk for both Williams and Reiter, but willbe the first in more than three years to leave an ISS astronaut inside theorbital laboratory.

Reiter'sarrival earlier this month returned the ISS to its three-personcrew size.

"Now wehave an extra body to help the crew get into and out of the suits, as well assomeone inside in case we have work that we need them to do during thespacewalk," Weiger said.