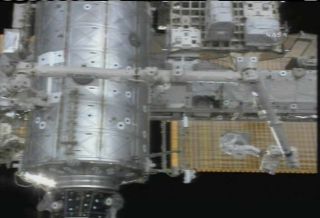 STS-121 spacewalker Michael Fossum totes a new Trailing Umbilical System (TUS) at the end of the ISS robotic arm during a July 10, 2006 spacewalk to replace a faulty station cable reel. The dark cavity seen in the ISS truss above Fossum is where he installed the new unit.
(Image: © NASA TV.)

HOUSTON - There was a lot riding on today'sspacewalkoutside the InternationalSpace Station (ISS) and two shuttle astronauts did not disappoint, NASAofficials said Monday.

"It was abig deal," Rick LaBrode, lead ISS flight director for NASA's STS-121mission, told reporters. "To get it behind us is a great feeling."

STS-121spacewalkers PiersSellers and MichaelFossum spent almost seven hours outside the ISS to stow a spare coolingsystem pump and replace a broken cable reel for the station's MobileTransporter. Both tasks will allow NASA to forge ahead with a preciselychoreographed series of 16 space shuttle missions - including STS-121 - to complete theorbital laboratory and staff it with six full-time astronauts.

"Theassembly sequence is set to proceed fast and furious here, we're only six orseven weeks away from the next mission," said Phil Engelauf, chief of NASA'sSTS-121 mission operations representative, during a briefing here at NASA'sJohnson Space Center. "Seeing how everything has worked here, we have a greenflag to press ahead."

NASA'sfirst ISS construction mission since late 2002 - STS-115 aboard the Atlantisorbiter - is slated to launch on Aug. 28 to deliver a pair of new solar panelwings and their massive truss mast to the orbital laboratory. The space agencyhopes to launch STS-116 aboard Discovery in December to continue the orbitalISS construction effort.

But much ofthat work hinged on restoring the backup power and data cable system for thestation's Mobile Transporter, which will be used to haul large ISS componentsinto position along the outpost's main truss. Today's spare pump moduleinstallation was also originally slated for the STS-116 crew, but was pushedearlier to get ahead on the many tasks needed to support the ISS.

Discovery'sSTS-121 mission is NASA's second orbiter flight since the 2003 Columbia accident and is atthe midpoint of a 13-day flight to the ISS. Sellers, Fossum and their shuttlecrewmates launchedtoward the ISS on July 4 carrying tons of supplies,a newstation astronaut and a mission to complete NASA's orbiter inspection andrepair tests before the flight is through.

"Themission is going great," Engelauf said. "The healthof the vehicle is great and we're not really working any particularproblems."

There maybe no major problems but Discovery spacewalkers Sellers and Fossum certainlyhad their share of frustrating moments during their Monday spacewalk, whichmarked the second of three planned for their STS-121 mission.

Theastronauts had to work through stuck bolts (the solution: twist the screwharder), a stubborn spring that prevented initial attempts to install the newcable reel in place, and a lot of bumping that ultimately knocked Sellers' emergencythruster system loose.

Sellers wasconnected to Discovery or the ISS with two tethers at all times, and not indanger of drifting free, but spacewalk planners were concerned the SimplifiedAid for EVA Rescue (SAFER) thruster system could separate from his spacesuit and pose a debrishazard for the orbiter or station. Fossum later reengaged the latches to lockSellers' SAFER system into its fittings.

"I wasn'tworried about the crew at all," said Tomas Gonzalez-Torres, lead spacewalkofficer for the STS-121 mission.

Gonzalez-Torressaid his STS-121 spacewalking astronauts and ground crew performed above thebar during the orbital repair, and were on schedule - and ahead at some times -through the six-hour and 47-minute activity.

"I couldn'thave asked for a better crew," Gonzalez-Torres said. "These guys werefantastic.