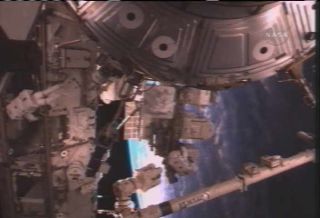 HOUSTON - A spacewalking pair of astronautshas paved the way for future construction of the International Space Station(ISS) after completing a critical repair to the orbital laboratory's mobilecrane Monday.

STS-121 astronauts PiersSellers and Michael Fossum restored a backup cable system for the station'srailcar-like Mobile Transporter during a nearly seven-hour spacewalkmore than 200 miles (321 kilometers) above Earth. The fix restores a dependablepower and data line for the Mobile Transporter, clearing the carrier for useduring NASA's next ISS construction mission - STS-115 aboard Atlantis - tolaunch in late August.

Today's six-hour and47-minute spacewalk, the second of NASA's STS-121 shuttle missions, began at8:14 a.m. EDT (1214 GMT) as Sellers stepped through the outer hatch of thestation's Quest airlock and into space.

There appeared to be onlyone significant hitch during today's spacewalk, when one of two small latches -referred to as towers - on Sellers' emergency thruster backpack popped free ofits mooring. The latches connect the SimplifiedAid for EVA Rescue (SAFER) thruster system, which is designed to helpastronauts return to their spacecraft should they drift free during aspacewalk, to the spacesuit proper.

"If the second tower comesfree, then the SAFER will no longer be connected to the astronaut," spacecraftcommunicator Julie Payette told the two spacewalkers.

They also had difficultiesinstalling the new cable reel into its berth on the ISS. After severalattempts, the reel slid firmly into place.

"What else can happen,man," Sellers said glibly.

Restoring the redundantpower cable system for the station's Mobile Transporter is a critical fix forthe ISS.

On Dec. 16, 2005, aguillotine-likecutting system unexpectedly fired on the Earth-facing side of the railcar,slicing its power and data cable there for no apparent reason. The Mobile Transporteris fed power and data lines from two cable assemblies - known as TrailingUmbilical System (TUS) reels - that pay out and draw in the lines as the cartslides along rails mounted to the space station's main truss.

An attempt to safeguard thesurviving cable and maintain railcar mobility failed in a Feb. 4spacewalk, when the space station's Expedition12 crew had to remove the power line altogether - immobilizing the carrierin the process - to ensure it would not be cut inadvertently as well.

But on Saturday, Sellersand Fossum installed ablade blocker on the cable cutter threaded by the railcar's then-onlyfunctional power cable. The quick-fix removed any danger of an unexpected bladefiring, and allowed the transported to move for today's spacewalk.

"We could accomplish[STS]-115 where we are now but we wouldn't have any redundancy in the cable endthat goes into that system," said John Shannon, NASA's deputy shuttle programmanager, during a Sunday briefing. "It is much better on a system that complexand that critical to have redundancy."

Prior to today's spacewalk,Sellers and Fossum described the complicated task asmore a dance rather than orbital repair. The two astronauts had to pass brokenand pristine TUS units between them, with Sellers holding onto both cable reelsat one point while Fossum worked from the tip of thespace station's robotic arm.

"The TUS is certainly in,"Sellers said after he and Fossum installed the newreel.

In addition to replacingthe Mobile Transporter's TUS reel, Fossum and Sellersdelivered a 1,393-pound (631-kilogram) spare pump module to the ISS.

The pump module is a backupfor two identical systems already installed on the ISS, with one on the Port-1truss while the other sits on the Starboard-1 truss. Each pump is designed totransport liquid ammonia through the space station's cooling system.

"That went very easy, bythe way, it's very easy to move," Sellers said about toting the hefty pumpmodule. "It's basically like moving a rowing boat to the dock with your hands."

The pump module installationappeared to go quite smoothly, but flight controllers said even the simplestspacewalk activity is no easy task.

"All EVAsare difficult," lead STS-121 shuttle flight director Tony Ceccaccisaid Sunday. "We're doing so much that everyone thinks they're like goingoutside and mowing your grass, but they each have their risks and they'redifficult to do."

Today's EVA marked thesecond career spacewalk for Fossum, who now has about14 hours and 18 minutes of orbital work under his belt. It was the fifth spacewalkfor Sellers, who has now spent almost 34 hours toiling outside a spacecraftwith nothing but a spacesuit for protection against the vacuum of space.

"This is where ingenuityand persistence paid off, and flexibility," Fossumsaid.

The spacewalk also markedthe 67th staged to support the ISS and the 20th thatbegan from the station's Quest airlock, but it will not be the last before thisweek is out.

Sellers and Fossum are scheduled to step outside one last time duringtheir 13-daymission during a July 12 spacewalk to test shuttle heat shield repairmethods inside Discovery's payload bay.