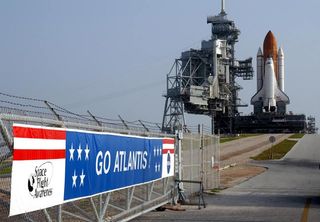 After twostalled attempts, NASA's spaceshuttle Atlantis rolled out to its Florida launch pad Wednesday as workersready the space plane for a planned liftoff later this month.

The orbiter'sMobile Launch Platform - which supports Atlantis, its external tank, and twinsolid rocket boosters - was on track to settle into final position on the pad atabout 9:00 a.m. EDT (1300 GMT), NASA officials told SPACE.com.

Despiteappearing hazy in NASA cameras at some times, while crystal clear at others,the weather appeared a welcome turn from the storms and lightning thatprevented Atlantis' two previous rollout attempts on Monday.

WithAtlantis now at the launch pad, all the pieces are in place for NASA's planned STS-115space shot to jump start construction of the International SpaceStation (ISS) no earlier than Aug. 27.

The shuttle'sprimary load - a 17-ton set of newtrusses and solar arrays for the space station - rolled out to Pad 39B lastweek, and sits inside the complex's payload changeout room to be installed inAtlantis' 60-foot (18-meter) cargo bay.

Constructionof the ISS has been stalled since late2002 as NASA worked to recover from the 2003 loss of the Columbia orbiterand its seven-astronautcrew.

NASA hasnow put two shuttle flights aboard the Discovery orbiter - last months' STS-121mission and 2005's firstpost-Columbia flight STS-114 - under its belt and is pushing ahead tolaunch its first dedicated orbital constructionspaceflight in more than three years.

Commanded byshuttle flight veteran BrentJett, the STS-115 astronauts will stage three spacewalks outside the ISS toinstall two trusses on the station's port side to support two new solar arrays.Atlantis and its crew will also be the second shuttle flight to visit the spacestation's Expedition 13 astronauts in two months.

Jett andhis STS-115 crewmates are expected to spend 11 days in orbit to complete theirmission. The spaceflight's launchwindow currently stretches from Aug. 27 to Sept. 13, though NASA is hopingfor a liftoff nolater than Sept. 7 to allow a future Russian Soyuz spacecraft to rocket towardsthe ISS on Sept. 14.