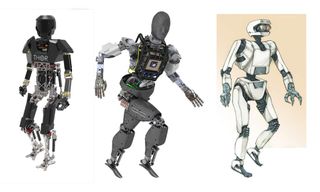 This week, 17 teams and their robot creations will descend on Florida to compete in an ambitious robotics competition.

The DARPA Robotics Challenge Trials are being held Friday and Saturday (Dec. 20–21) at the Homestead Miami Speedway in Homestead, Fla. The contest, which features teams from five different countries, is designed to foster the development of robots that could one day provide assistance following natural or manmade disasters.

DARPA, an arm of the U.S. Department of Defense responsible for developing new technologies for the military, will evaluate the performance of the robots on eight separate physical tasks. The challenges are intended to test the human operators and the robots' autonomous decision-making, perception, mobility, strength and dexterity. [Images: DARPA Robotics Challenge]

Here are the eight tasks that will be on display at the DARPA Robotics Challenge:

A course will be set up to test the robots' ability to navigate a vehicle around a series of pylons. This task will require the robot to drive through the course, demonstrating that it can operate an accelerator and rotate a steering wheel. At the finish line, the robot must show that it can get out of the vehicle and move through a designated end zone.

This task will have three components that evaluate the robots' ability to traverse different types of terrain. First, the robots will move over a series of ramps, before tackling two piles of blocks that are designed to mimic ground that is littered with debris.

The blocks will not be fastened to the ground, so the robots will have to demonstrate that they can handle shifting terrain.

For this task, the robots will climb an 8-foot-high (2.4 meters) ladder. Points will be awarded based on the number of steps the robot ascends. The robot does not need to descend the ladder, and will be lowered to the ground by DARPA officials, if needed.

To demonstrate their dexterity and mobility, the robots will be required to remove five pieces of debris from their path. According to DARPA officials, no part of the cleared debris may touch the floor inside a rectangle formed by a doorway and a designated start line, to demonstrate the robot's level of control in manipulating the unwanted debris.

An additional point will be awarded for robots that remove five more pieces of debris from the area. Next, the robots will travel through an open doorway, which has no threshold. The task will be considered complete when the individual robot has crossed a line marked on the ground beyond the door.

The robots must demonstrate three different ways of opening a door: pushing open a door, entering a door by pulling it open, and then pulling open and entering a door that is weighted to close. [Images: Cutting-Edge Robots]

The three parts of the "door task" must be completed in the above order. None of the doors will have a threshold, and this part of the challenge will take place on a flat surface, according to DARPA officials.

Next, the robots will demonstrate their ability to operate within a disaster environment. The robots will be required to cut through 1/2-inch-thick (1.2 centimeters) drywall, and then remove a triangular piece from the wall.

There will be no obstructions on or behind the wall where the robots will be operating. The task will evaluate the robots' ability to cut exclusively within a green-colored area. There are also no limits to the order or number of cuts necessary to remove the triangular-shaped piece of drywall.

To show off their robotic dexterity, the competitors will next close a series of valves that control airflow in pipes. The robots will close three valves in any order, and the task will be deemed complete when the air stops flowing through the pipes.

Being able to complete this type of task could one day prove useful in disaster situations, when robots are capable of completing tasks that are deemed too risky or dangerous for humans. For instance, DARPA officials have said, robots could have been helpful in the aftermath of the March 2011 earthquake and tsunami that struck Japan, which caused radioactive water to leak from the stricken Fukushima nuclear plant.