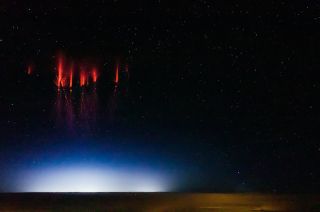 Sprites last less than a second as they dance on the tops of thunderstorms. Many viewers say the clusters of charged particles look like jellyfish — big, red balls with tendrils that reach down into the clouds. But red sprites take many shapes, from crowns to carrots, and researchers still don't why. Because few sprites are seen from the ground, thanks to obscuring storms, scientists are hunting them from the air.

During the research flights, the scientists snapped high-speed photos and video, which will help them to better understand the chemical and physical processes behind the phenomenon.

"It's still not clear what exactly is happening in a sprite, and why there are different kinds of sprites," Ahrns told LiveScience in an email interview.

Sprites could also impact weather and climate by changing conditions in Earth's atmosphere, but scientists don't yet know the scale of the effect, Ahrns said. "We can't answer that without studying them."

"There's about one positive lightning stroke for every 10 regular negative strokes," said Ahrns, using the technical term for lightning bolt. "Most big storms probably produce a few sprites, and some produce lots of them. They're probably more common than people think, they're just very difficult to see since they're above the clouds."

Red sprites can race high toward space, up to 60 miles (96 kilometers) above the Earth. Astronauts aboard the International Space Station caught a sprite on camera in 2012. A sprite's red tendrils also reach down into the stratosphere, about 15 to 20 miles (25 to 32 km) above Earth's surface. They look brightest between 40 to 45 miles (65 to 72 km) up.

The sprite hunters worked at night this summer, waiting for thunderstorms to lash Oklahoma and Kansas before launching into the air. The high-speed research cameras ran continuously, always storing the previous second of data so humans with slow fingers wouldn't miss the short-lived sprites. Ahrns also ran his personal camera all night to snap the spectacular images seen here.

"Beyond getting to the right storm and picking the right exposure, it was mostly a matter of luck. The sprites are way too fast for a human to react and hit the button at the right time," Ahrns said.

This story was provided by LiveScience, a sister site to SPACE.com. Email Becky Oskin or follow her @beckyoskin. Follow us @livescience, Facebook & Google+. Original article on LiveScience.