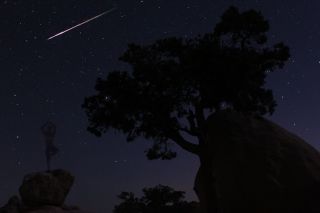 Night sky watcher Natalie Duran took this photo of the Perseid meteor shower from Joshua Tree National Park on August 12, 2012. The photographer can be seen standing on a rock in the background.
(Image: © Natalie Duran)

August could be a banner month for skywatchers, weather permitting.

The August night sky stars the return of the potentially spectacular Comet ISON, as well as the annual Perseid meteor shower. The beloved Perseids rarely disappoint, and this year's performance could be especially dazzling.

This month also offers skywatchers good looks at Mercury, Venus, Mars and several other planets, some of which will line up with each other or the moon in impressive celestial displays.

Comet ISON is a "comet of the century" candidate that could put on a stunning show when it makes a close pass by the sun in late November.

The icy wanderer, which was just discovered in September 2012, has been invisible in our skies for the last two months, masked by the glare of the sun. But it should start returning to view in the next few weeks.

"On Aug. 10, Comet ISON will be 18.1 degrees from the sun and will begin rising above the east-northeast horizon before dawn," Rao wrote earlier this week. (Your clenched fist held at arm's length measures about 10 degrees.)

"For mid-northern latitudes on the morning of Aug. 21, ISON will stand 6 degrees above the east-northeast horizon at the start of twilight," Rao added. "And by the end of August, the comet's altitude will double to 12 degrees by the time dawn begins to break, making it an easy target for skywatchers."

But it's not clear just what skywatchers will see, Rao and others stress. It's tough to predict the behavior of any comet, especially those (like Comet ISON) that are making their first trip to the inner solar system from the distant, frigid Oort Cloud.

ISON is slated to cross the solar system's "frost line" — the point at which a body's water ice begins to boil off into space — in the next few weeks. The comet could potentially brighten considerably when that happens, researchers say.

But the real action is expected around and shortly after Nov. 28, when ISON will skim just 724,000 miles (1.16 million kilometers) above the surface of the sun. If ISON doesn't break apart during its solar approach — a big if, experts stress — it could blaze incredibly brightly and go down in history as a truly great comet.

The Perseids are another skywatching highlight this month. This shower, which occurs when Earth plows through streams of debris shed over the years by Comet Swift-Tuttle, is widely regarded as the best of all the annual meteor displays in the Northern Hemisphere.

While the Perseids peak toward the end of next week, you don't have to wait until those dates to observe them.

"You can start watching a week or more before the peak nights of August 11-12 and 12-13, assuming you have a dark sky," Bruce McClure noted at Earthsky.org. "The Perseid shower is known to rise gradually to a peak, then fall off rapidly afterwards. So as the nights pass in the week before the shower, the meteors will increase in number."

The Perseids, so named because they appear to emanate from the constellation Perseus, often exhibit peak meteor rates of 50 to 100 per hour. The shower is also known for its fireballs — meteors that shine at least as brightly as the planet Venus.

The planet-watching will also be good this month, giving stargazers yet another reason to look up.

"Early in the month, Jupiter, Mars and Mercury line up in the eastern morning sky," narrator Nancy Calo from the Space Telescope Science Institute said in a video highlighting August skywatching. "Mercury slips into the horizon by mid-month, while Mars and Jupiter rise higher in the predawn sky."

Venus is visible as a bright "evening star," setting just after the sun, while Saturn sits low in the southwestern sky and sets about 11 p.m. local time.

Venus and the moon will dance together on Aug. 9, while Jupiter and Saturn take turns tangoing with Earth's nearest neighbor on Aug. 12 and Aug. 31, respectively. And August's full moon — usually called the Corn Moon, Sturgeon Moon, Red Moon, Green Corn Moon or Grain Moon — occurs on the 20th of the month.

Editor's Note: If you have an amazing picture of any night sky view that you'd like to share for a possible story or image gallery, send photos, comments and your name and location to managing editor Tariq Malik at spacephotos@space.com.