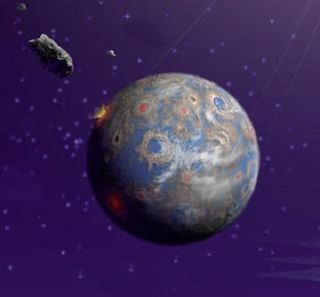 An asteroid believed to have smacked Earth some 65 million years ago likely caused a global firestorm that led to extensive plant and animal extinctions, a new study shows.
(Image: © Illustration courtesy NASA/JPL)

The huge asteroid impact thought to have wiped out the dinosaurs some 65 million years ago may have painted the sky a blazing-hot red and sparked a cataclysmic global firestorm, researchers say.

Most scientists believe the mass die-off known as the K-T extinction — which saw up to 80 percent of all species vanish — was caused by an asteroid or comet that carved out the 112-mile-wide (180 kilometers) Chicxulub crater in what is today Mexico.

Researchers who created a new model of the disaster say the impact would have sent vaporized particles of rock high above the planet's atmosphere, where they would have condensed into sand-grain-sized bits. Falling back to Earth, the hot ejected rock material may have dumped enough heat in the upper atmosphere to cause it to bake at 2,700 degrees Fahrenheit (1,482 degrees Celsius), turning the sky red for several hours.

This infrared "heat pulse" would have acted like a broiler oven, igniting tinder below and cooking every twig, bush, tree and basically every living thing not shielded underground or underwater, the researchers say. [Top 10 Ways to Destroy Earth]

"It's likely that the total amount of infrared heat was equal to a 1 megaton bomb exploding every four miles over the entire Earth," study researcher Douglas Robertson, of the Cooperative Institute for Research in Environmental Sciences, or CIRES, said in a statement.

To give an idea of the staggering amount of energy unleashed by this heat pulse, the researchers note that a 1-megaton hydrogen bomb would be the equivalent of 80 Hiroshima-type nuclear bombs, and the Chicxulub event is thought to have produced about 100 million megatons of energy.

The global firestorm theory has been put forth before, but some scientists have questioned it, claiming that much of this intense radiation would have been blocked from Earth by the falling rock material. Even after accounting for this shielding, however, the model created by Robertson and his team found the sky still would have heated up enough to set the world's forests ablaze.

Adding to the team's evidence is a layer of excess charcoal found in sediment at the Cretaceous-Paleogene, or K-Pg, boundary (dated to about 65 million years ago), which would be consistent with global fires. Other scientists had suggested the soot was debris from the impact itself. But there's too much charcoal in this layer to have been dumped on Earth by the asteroid crash alone, according to Robertson and his colleagues.

"Our data show the conditions back then are consistent with widespread fires across the planet," said Robertson. "Those conditions resulted in 100 percent extinction rates for about 80 percent of all life on Earth."

There is still some debate about whether the Chicxulub impact triggered the K-T extinction. Some researchers link the catastrophe to volcanic activity in modern-day India and others have pointed fingers at different impact sites, such as the Shiva crater in India.

CIRES is a joint institute of the University of Colorado Boulder and the National Oceanic and Atmospheric Administration (NOAA). The new research was detailed this week in the Journal of Geophysical Research-Biogeosciences.