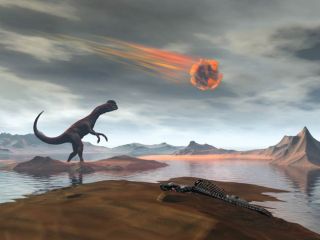 An artist rendering of a space rock streaking toward Earth. Most experts think an impact off the Yucatan Peninsula 65 million years ago was the primary cause of the dinosaur demise. Others think volcanism and climate change may have played a role. A new and controversial idea suggests there was another, larger impact in India that was responsible.
(Image: © stockxpert)

Editor's Note: For the latest on the dino-killing asteroid that created the Chicxulub impact crater read:
Asteroid Impact That Killed the Dinosaurs: New Evidence
and
Chicxulub Asteroid Impact: The Dino-Killer That Scientists Laughed At

The extinction of the dinosaurs has often been traced to a giant space rock impact on the Earth 65 million years ago. But now a scientist is saying experts have blamed the wrong impact. The new thinking was met with sharp criticism from other researchers, however.

Paleontologist Sankar Chatterjee of Texas Tech University says a giant basin in India called Shiva could also be an impact crater from the time of the dinosaurs' demise, and the crash that created it may have been the cause of the mass extinction scientists call the KT (Cretaceous/Tertiary) event, which killed off more than half the Earth's species along with the dinos. This argument runs counter to the widely-held wisdom that the Chicxulub impact on the Yucatan Peninsula off Mexico was behind the cataclysm.

Chatterjee presented his argument Sunday at the Annual Meeting of the Geological Society of America in Portland, Ore.

Some of his fellow scientists are skeptical, though.

The cause of the dinosaurs' demise is far from an open-and-shut case. Though many experts support the Chicxulub impact theory, some question whether the extinction was caused by an impact at all, and suggest that climate changes and volcanism were responsible. One line of reasoning holds that all three phenomena were to blame.

Gerta Keller, a geoscientist at Princeton University, found evidence for massive volcanic activity coinciding with the time of the extinction in an area called the Deccan Traps in India. Keller has advocated that this volcanism was the main culprit behind the dinosaurs' downfall. Her idea has long been controversial and remains so. She is bluntly dubious of Chatterjee's argument.

"We have worked extensively throughout India and investigated a number of the localities where Sankar Chatterjee claims to have evidence of a large impact he calls Shiva crater," Keller wrote in an e-mail along with colleague Thierry Adatte of Switzerland's Universit de Neuchtel. "Unfortunately, we have found no evidence to support his claims? Sorry to say, this is all nonsense."

Chatterjee cites a number of geologic features found near the Shiva site to suggest that it's a crater, including shocked quartz known to be created during impacts, and iridium, an element found abundantly in meteorites and which is relatively rare in the Earth's crust.

"These are the things which only can be found by impact," Chatterjee told SPACE.com.

But Keller said each of these signals can be ascribed to causes other than a space rock impact. For example, the shocked quartz lacks the telltale signs denoting a high velocity impact shock, and the iridium dates from another time period than the KT era, she contends.

And though Chatterjee's abstract was approved by conference organizers for the Geological Society of America meeting, this research has not been peer-reviewed in a scientific journal.

The prevailing theory behind the mass extinctions remains the Chicxulub impact idea.

"I would say 95 percent or more of the earth scientists who study the KT boundary are in agreement that Chicxulub is the event that brought on the KT mass extinctions," said geophysicist Sean Gulick of the University of Texas at Austin.

As for the Shiva hypothesis, Gulick was very doubtful.

"There's a bunch of problems to say the least," Gulick said of Chatterjee's hypothesis. "There is no evidence that he's presenting of it actually being a crater."

Gulick said that the Shiva impact features noted by Chatterjee could easily have resulted from the Chicxulub impact, which is thought to have kicked up material that circled the globe.

"There is an event layer caused by the impact that is everywhere," Gulick said in a phone interview. "There's evidence globally for the shocked quartz, the iridium. As you approach Mexico the event layer gets thicker and thicker. He's got no local evidence it's an impact."

Gulick also objects to the size of the supposed Shiva crater, which Chatterjee claims is the largest impact crater known on Earth with a diameter of about 310 miles (500 km). That would make it about three times wider than Chicxulub, which has a diameter of about 110 miles (180 km).

Such a large impact occurring at the same time as the confirmed Chicxulub impact seems unlikely, Gulick said.

The oblong shape of Shiva is also suspect for an impact crater, as most are round, Gulick said. To have created an oval-shaped crater an incoming asteroid would have had to skim in at a very shallow angle, which is a rare occurrence.

Chatterjee admitted these are coincidences, but suggested that maybe both the Chicxulub and Shiva impacts spawned from one massive space rock, which broke apart into two main pieces. And as for the angle - it's rare but not unheard of, he said.