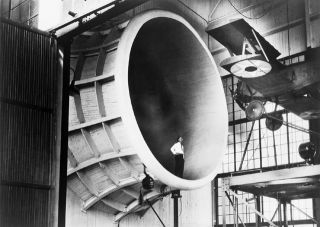 In this historical photo from the U.S. space agency, a Langley researcher ponders the future, in mid-1927, of the Sperry M-1 Messenger, the first full-scale airplane tested in the Propeller Research Tunnel. Standing in the exit cone is Elton W. Miller, Max M. Munk's successor as chief of aerodynamics.