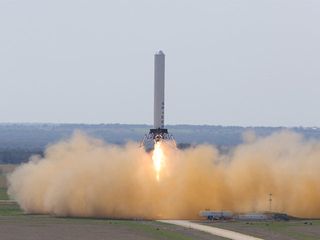 A private experimental rocket that could lay the foundation for a fully reusable launch system has passed its most ambitious test yet, flying 24 stories high and then sticking its landing.

SpaceX's Grasshopper rocket ascended 263 feet (80 meters) into the Texas sky during its fourth-ever test flight on March 7, doubling its highest hop to date. Grasshopper hovered for 34 seconds before heading back down and landing softly at the center of its launchpad, SpaceX officials said.

This latest test flight, conducted at SpaceX's rocket development facility in McGregor, Texas, was unmanned. But a dummy dressed as Johnny Cash rode along on the rocket's exterior, which explains why SpaceX set its video of the Grasshopper flight to Cash's famous song "Ring of Fire."

"Hey Johnny, how was the ride?" SpaceX officials said Thursday (March 14) via the company's official Twitter feed in a post that also linked to a screenshot showing the rocket-riding "Mannequin in Black."

SpaceX wants to make spaceflight much cheaper by developing fully and rapidly reusable rockets. Grasshopper is key to making this goal a reality, officials said.

"With Grasshopper, SpaceX engineers are testing the technology that would enable a launched rocket to land intact, rather than burning up upon reentry to the Earth’s atmosphere," company officials said in a statement after the rocket's fourth test flight.

Grasshopper stands about 10 stories tall and incorporates the first-stage tank of SpaceX's Falcon 9 rocket, which launched the company's robotic Dragon capsule on its second contracted cargo run to the International Space Station for NASA earlier this month.

Grasshopper is powered by a single engine (compared to nine for the Falcon 9). It lands vertically on four metallic legs.

The California-based SpaceX holds a $1.6 billion NASA contract to make 12 unmanned supply runs to the space station. Dragon is slated to end its current mission on March 25, when it will splash down in the Pacific Ocean off the coast of Baja California.

The company is also developing a manned version of Dragon and is one of several firms competing to fly NASA astronauts to and from the orbiting lab.