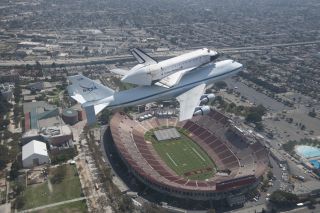 Space shuttle Endeavour is seen flying over its new home at the California Science Center (CSC), Sept. 21, 2012. This photo, along with more than 80 others like it, are part of a new exhibit at the CSC chronicling "Mission 26: The Big Endeavour."
(Image: © NASA/Jim Ross)

Space shuttle Endeavour's final journey to become a museum display last year is now the focus of a new photography exhibit at its Los Angeles home.

The California Science Center unveiled the new exhibition "Mission 26: The Big Endeavour"on Monday (March 11), adding a new experience for guests visiting the retired NASA space shuttle. The gallery of more than 80 images aims to highlight the scenes that were witnessed by spectators as Endeavour was flown over the Golden State and during its 68-hour journey through 12 miles (19 kilometers) of city streets.

The new exhibit, which is sponsored by the Los Angeles Times, includes many of the images that the newspaper's photographers took during the unprecedented delivery of space shuttle Endeavour. A time-lapse video, together with contributions from students in the area, complete the gallery, which invites guests to recall what it was like to be part of the historic event.

Moving Endeavour cross-country was a massive, complex undertaking. On Sept. 19, 2012, Endeavour took flight and was carried on the back of a modified Boeing 747 jumbo jet from NASA's Kennedy Space Center in Florida to the agency's Dryden Flight Research Center at Edwards Air Force Base in Palmdale, California. [Gallery: Endeavour's Cross-Country Journey]

Along the way, the ferry flight passed over several other NASA facilities and spent an overnight layover at Ellington Field near Johnson Space Center in Houston. The Shuttle Carrier Aircraft (SCA), carrying Endeavour piggyback, also refueled at Biggs Air Force Base in El Paso, Texas before continuing on to Southern California.

On the final leg of its three-day journey by air, Endeavour flew over many California landmarksas it passed over the state, from Sacramento to Los Angeles, while millions of onlookers marveled at the flyover all along the way. The iconic black and white orbiter, carried atop the white, blue and gray jetliner, was photographed flying by the Golden Gate Bridge, in front of the Hollywood Sign and above the Disneyland Resort, among many other notable places.

After making its last landing at Los Angeles International Airport, Endeavour was prepared for another adventurous journey through the heart of urban Los Angeles to its new home at the California Science Center. At 78 feet (24 meters) wide, 57 feet high (17 m) and 122 feet long (37 m), navigating the streets of Los Angeles and Inglewood required the skill and guidance of over 100 people from numerous agencies spread across both cities.

Over the course of the road trip, traffic was diverted, and technicians lifted power lines and took down traffic lights while approximately 1.5 million people lined the streets to celebrate the event. For most of the journey, Endeavour rode on four remotely-controlled transporters, but a Toyota Tundra truck was also used to tow the space shuttle when it came time to cross over the 405 L.A. freeway.

Photographers and filmmakers were on hand to document this "once-in-forever" historic trip. What they captured will be on view for guests to the California Science Center as part of the "Mission 26: The Big Endeavour" exhibit today through Sept. 2, 2013.

In addition to the new photo gallery, visitors can also tour "Endeavour: The California Story," a companion exhibit to the Samuel Oschin Pavilion where the shuttle is housed.

The California Science Center has welcomed more than 1 million guests since Endeavour was installed on Oct. 31, 2012. Prior to the shuttle arriving, the institution's annual attendance was about 1.6 million visitors.