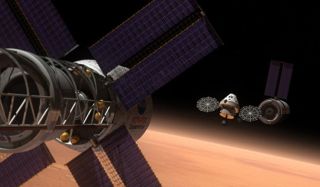 The danger of space radiation is one of the biggest obstacles to the manned exploration of deep space, and NASA is hoping today's kids can help overcome it.

NASA has launched an exploration design challenge asking K-12 students around the world to help protect astronauts and spacecraft hardware from the high levels of space radiation they will experience beyond Earth's protective magnetosphere, the agency announced today (March 11).

"America's next step in human space exploration is an ambitious one and will require new technologies, including ways to keep our astronauts safe from the effects of deep-space radiation," NASA chief Charles Bolden said in a statement. "That is the focus of this challenge, and we are excited students will be helping us solve that problem."

Kids in elementary and middle school will recommend materials that could be used as astronaut-protecting shielding on NASA's Orion deep space capsule, which is currently in development. High schoolers will be tasked with actually designing shielding that protects an Orion sensor from space radiation; the winning design will ride to space on an Orion test flight in 2014, officials said. [Photos: NASA's Orion Space Capsule]

The student challenge — which is a joint effort involving NASA, aerospace firm Lockheed Martin and the National Institute of Aerospace — aims to get kids excited about science, technology, engineering and math.

"Space exploration has inspired and fascinated young people for generations, and the Exploration Design Challenge is a unique way to capture and engage the imaginations of tomorrow's engineers and scientists," Lockheed Martin CEO and president Marillyn Hewson said in a statement.

NASA is gearing up to send people farther from Earth than they've ever gone before. In 2010, President Barack Obama directed the agency to get astronauts to a near-Earth asteroid by 2025, then on to the vicinity of Mars by the mid-2030s.

They will get there using Orion and NASA's huge Space Launch System (SLS) rocket. The pair are slated to fly together for the first time in 2017, with SLS launching Orion on an unmanned flight around the moon.

Orion will reach space before then, however, blasting to Earth orbit atop a United Launch Alliance Delta 4 heavy rocket in 2014 on an unmanned mission called Exploration Flight Test 1.

"Exploration Flight Test 1 is set to launch next year, so participating in this challenge will give the students a real sense of being part of the NASA team," NASA associate administrator for education Leland Melvin said in a statement. "They will be able to chart Orion's progress as it moves closer to the test launch. That's important because these students represent our future scientists, engineers and explorers."

To learn more about the Exploration Design Challenge, visit: http://www.nasa.gov/education/edc