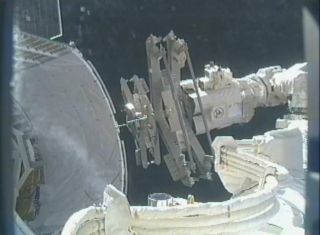 The Dragon spacecraft, built by the private spaceflight company SpaceX, launched to the space station on Friday (March 1) and arrived two days later to deliver about 1,200 pounds (544 kilograms) of supplies to the orbiting lab. The mission is SpaceX's second of 12 commercial cargo deliveries for NASA under a $1.6 billion agreement.

SpaceX launched a demonstration flight to the space station last May, and its first cargo delivery in October. But both of those missions only carried items inside the Dragon's pressurized re-entry capsule, which is accessible to astronauts on the station through a docking hatch. [See photos of Dragon's space station arrival]

Today's robotic arm work marked the first time SpaceX has ever delivered gear meant for the outside of the space station using the Dragon's trunk, company officials have said. SpaceX built the support hardware holding the grapple bars in place on the Dragon capsule, they added.

The six astronauts living aboard the space station unloaded the pressurized cargo section by Monday (March 4), leaving only the grapple bars to be retrieved.

"These bars, which together weigh about 600 pounds [272 kilograms], can be used to remove failed radiators on the station’s S1 and P1 truss segments, should that ever be deemed necessary," NASA officials said in a statement.

The grapple bars will be stored in a temporary spot on the International Space Station exterior for now, but will eventually be mounted to a permanent storage point, NASA officials wrote in a statement.

With the Dragon capsule empty, the station crew will soon start loading the capsule with 2,668 pounds (1,210 kilograms) of experiments and unneeded items for the spacecraft's return to Earth on March 25. The Dragon is expected to splash down off Baja California in the Pacific Ocean so it can be retrieved by recovery teams.

Various space agencies are expecting items to return to Earth on board Dragon. For example, stem cells and hair that are currently being used in experiments on the station will be sent down with Dragon for the Japan Aerospace Exploration Agency.

Empty food containers will also be delivered back to Earth, according to a NASA manifest. And some science experiments are making a round trip with the capsule.

The Hawthorne, Calif.-based SpaceX is one of two companies with billion-dollar contracts to supply cargo missions to the space station for NASA. The other company, Orbital Sciences Corp. of Virginia, has a $1.9 billion contract with the agency for eight resupply missions to the station using the new Antares rocket and Cygnus spacecraft.

NASA is relying on privately built spacecraft to ferry cargo — and ultimately astronaut crews — to and from the International Space Station. With the retirement of its space shuttle fleet in 2011, NASA is currently dependent on Russia's Soyuz spacecraft to launch American astronauts to the space station.