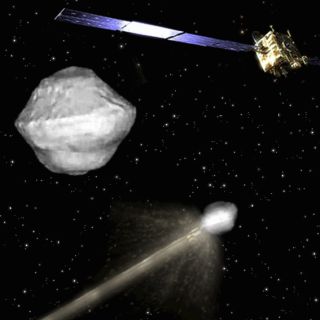 A mission that aims to slam a spacecraft into a near-Earth asteroid now officially has a target — a space rock called Didymos.

The joint European/U.S. Asteroid Impact and Deflection Assessment mission, or AIDA, will work to intercept Didymos in 2022, when the space rock is about 6.8 million miles (11 million kilometers) from Earth, European Space Agency officials announced Friday (Feb. 22).

Didymos is actually a binary system, in which a 2,625-foot-wide (800 meters) asteroid and a 490-foot (150 m) space rock orbit each other. Didymos poses no threat to Earth in the foreseeable future.

The proposed asteroid-smashing AIDA mission will send one small probe crashing into the smaller asteroid at about 14,000 mph (22,530 kph) while another spacecraft records the dramatic encounter. Meanwhile, Earth-based instruments will record so-called  "ground-truthing" observations.

The goal is to learn more about how humanity could ward off a potentially dangerous space rock. The necessity of developing a viable deflection strategy was underlined in many people's minds by the events of last Friday (Feb. 15), when the 130-foot (40 m) asteroid 2012 DA14 gave Earth a historically close shave just hours after a 55-foot (17 m) object exploded above the Russian city of Chelyabinsk, injuring 1,200 people and damaging thousands of buildings.

The AIDA impact will unleash about as much energy as that released when a big piece of space junk hits a satellite, researchers said, so the mission could also help improve models of space-debris collisions.

"The project has value in many areas, from applied science and exploration to asteroid resource utilization," Andy Cheng, AIDA lead at Johns Hopkins University's Applied Physics Laboratory, said in a statement.

The European Space Agency (ESA) has asked scientists around the world to propose experiments that AIDA could carry in space or that could increase its scientific return from the ground. Researchers have until March 15 to pitch their ideas.