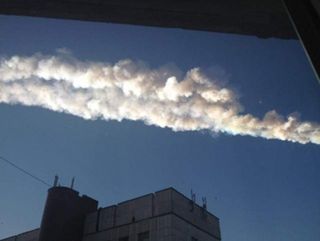 The biggest meteor blast in a century is expected to kick off a booming market in rocks from space.

Collectors are already heading for the Chelyabinsk region in Russia, hoping to find a fragment of the 7,000-ton object. NASA estimates the Russian meteor was roughly 50 feet (15 meters) in diameter when it hit Earth's atmosphere this morning (Feb. 15), exploding into a fireball brighter than the sun.

"This is the biggest event in our lifetime," said rock dealer Michael Farmer of Tucson, Ariz. "It's very exciting scientifically and for collecting, and luckily, it looks like there will be plenty of it."

While much of the meteor likely vaporized in the atmosphere, the chunk of rock was big enough that quite a bit of material probably reached the ground, said Marc Fries, a meteor-tracking expert and senior scientist at the Planetary Science Institute in Tucson. [5 Amazing Fireballs]

While Russian scientists have yet to classify the meteorite, pictures and video posted online of dark, stony rock fragments found near a crater in a frozen lake hint at its composition.

"That tells me right off the bat that this was not an iron meteorite, so your remaining possibilities are some sort of chondrite, the stony meteorites," Fries told OurAmazingPlanet.

Iron meteorites are also less likely to break up in the atmosphere than stony meteorites, leading meteorite expert Alan Rubin to suspect that the Chelyabinsk fireball is a chondrite. Chondrites are also the most common meteorite: More than 70 percent of all meteorite falls seen on Earth are chondrites, said Rubin, a geology professor at the University of California, Los Angeles.

Meteorites fall into two broad categories: iron or stony. The iron meteorites are about 90 percent iron, while stony meteorites are made of rock and small bits of metal.

Purported pieces of the Russian meteorite have already been posted on eBay, but they're likely fakes, Rubin said. "The one picture I saw looked like slag," he told OurAmazingPlanet. (Slag is the by-product of smelting ore.)

Whether the meteor reveals a rare composition or ordinary minerals, Rubin said he would be excited to see some samples. The composition of stony meteorites contains clues to the formation of the early solar system, he said.

"By studying meteorites and determining where they came from, we can make a map of the early solar system, and that gives us a good handle on the origin of the whole planetary system," he said.

Rock dealer Farmer said he's planning to leave for Russia as soon as possible. "I wouldn't miss this for the world," he said.

Collecting rocks for export is legal in Russia with the correct paperwork, Farmer said, adding that collectors he knew were already traveling to the region. "I expect a lot of material to be on the market within days," he told OurAmazingPlanet.

The value will be determined by the rock's rarity, Farmer said — whether it has an unusual composition and whether a lot of material ends up on the market.