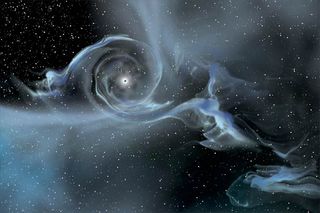 One contender for the smallest thing in the universe is the singularity at the center of a black hole. (Shown here, an artist's drawing of a black hole pulling gas away from a companion star.
(Image: © NASA E/PO, Sonoma State University, Aurore Simonnet)

The answer to the enduring question of the smallest thing in the universe has evolved along with humanity. People once thought grains of sand were the building blocks of what we see around us. Then the atom was discovered, and it was thought indivisible, until it was split to reveal protons, neutrons and electrons inside. These too, seemed like fundamental particles, before scientists discovered that protons and neutrons are made of three quarks each.

"This time we haven't been able to see any evidence at all that there's anything inside quarks," said physicist Andy Parker. "Have we reached the most fundamental layer of matter?"

And even if quarks and electrons are indivisible, Parker said, scientists don't know if they are the smallest bits of matter in existence, or if the universe contains objects that are even more minute. [Graphic: Nature's Tiniest Particles]

Parker, a professor of high-energy physics at England's Cambridge University, recently hosted a television special on the U.K.'s BBC Two channel called "Horizon: How Small is the Universe?"

In experiments, teensy, tiny particles like quarks and electrons seem to act like single points of matter with no spatial distribution. But point-like objects complicate the laws of physics. Because you can get infinitely close to a point, the forces acting on it can become infinitely large, and scientists hate infinities.

An idea called superstring theory could solve this issue. The theory posits that all particles, instead of being point-like, are actually little loops of string. Nothing can get infinitely close to a loop of string, because it will always be slightly closer to one part than another. That "loophole" appears to solve some of these problems of infinities, making the idea appealing to physicists. Yet scientists still have no experimental evidence that string theory is correct.

Another way of solving the point problem is to say that space itself isn't continuous and smooth, but is actually made of discrete pixels, or grains, sometimes referred to as space-time foam. In that case, two particles wouldn't be able to come infinitely close to each other because they would always have to be separated by the minimum size of a grain of space.

Another contender for the title of smallest thing in the universe is the singularity at the center of a black hole. Black holes are formed when matter is condensed in a small enough space that gravity takes over, causing the matter to pull inward and inward, ultimately condensing into a single point of infinite density. At least, according to the current laws of physics.

But most experts don't think black holes are really infinitely dense. They think this infinity is the product of an inherent conflict between two reigning theories — general relativity and quantum mechanics — and that when a theory of quantum gravity can be formulated, the true nature of black holes will be revealed.

"My guess is that [black hole singularities] are quite a lot smaller than a quark, but I don't believe they're of infinite density," Parker told LiveScience. "Most likely they are maybe a million million times or even more than that smaller than the distances we've seen so far."

That would make singularities roughly the size of superstrings, if they exist.

Superstrings, singularities, and even grains of the universe could all turn out to be about the size of the "Planck length." [Tiny Grandeur: Stunning Photos of the Very Small]

A Planck length is 1.6 x 10^-35 meters (the number 16 preceded by 34 zeroes and a decimal point) — an incomprehensibly small scale that is implicated in various aspects of physics.

The Planck length is far and away too small for any instrument to measure, but beyond that, it is thought to represent the theoretical limit of the shortest measureable length. According to the uncertainty principle, no instrument should ever be able to measure anything smaller, because at that range, the universe is probabilistic and indeterminate.

This scale is also thought to be the demarcating line between general relativity and quantum mechanics.

"It corresponds to the distance where the gravitational field is so strong that it can start to do things like make black holes out of the energy of the field," Parker said. "At the Planck length we expect quantum gravity takes over."

Perhaps all of the universe's smallest things are roughly the size of the Planck length.