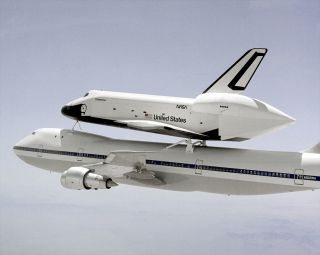 Space shuttle Enterprise in flight on top of NASA's Shuttle Carrier Aircraft in 1983. The duo took off for New York City on April 27, 2012.
(Image: © NASA)

NEW YORK — Space shuttle Enterprise took to the air Friday morning (April 27) for the first time in more than a quarter-century, but the two-hour flight is also to be its last. Its final destination: the Big Apple.

The air- and spacecraft duo is expected to land at John F. Kennedy (JFK) International Airport around 11:30 a.m. EDT (1530 GMT) after flying over the New York City metro area and some of its most famous landmarks. CNN is airing live coverage of the flight and landing here, if you want to watch.

The ferry flight marks the second time in as many weeks that NASA has flown one of its retired space shuttles to begin a new mission as a museum display. Last week, the same carrier plane ferried shuttle Discovery, NASA's fleet leader, from Kennedy Space Center in Florida to Washington, where it replaced Enterprise as an exhibit at the Smithsonian National Air and Space Museum's Steven F. Udvar-Hazy Center in Chantilly, Va. [Photos: A Space Shuttle Called 'Enterprise']

Enterprise had been on display at the Udvar-Hazy Center since December 2003. It arrived in Washington 18 years earlier on November 18, 1985, completing what was thought by many to be its final landing. While the shuttle never flew in space, it performed vital approach and landing tests in the late 1970s.

On today's ferry flight, Enterprise is expected to fly by the Intrepid and the Statue of Liberty, among other New York City landmarks, on its way into the JFK airport. Accompanying the 747 and shuttle in flight were NASA's C-9 Pathfinder plane and two T-38 training jets assigned to capture aerial imagery of the flyover.

The Intrepid invited 1,500 guests to witness the landing at JFK and welcome the Enterprise to New York. The public was invited to gather at the riverside museum to witness the flyover.

After Enterprise is removed from the top of its NASA 747 carrier plane in a few weeks, it will be barged around the city to the Intrepid by way of the Hudson River in June. Once positioned alongside the Intrepid, Enterprise will be craned onto the museum's flight deck and covered by a climate-controlled temporary structure for public display.

This is not Enterprise's first time flying to New York City. Although it did not land, the prototype orbiter passed over the Big Apple on its way back from the Paris Air Show on June 10, 1983.