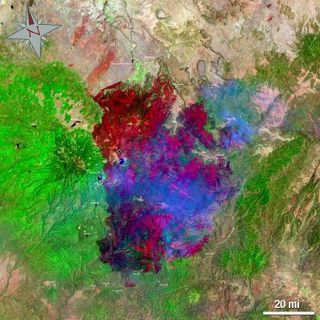 This Landsat 5 satellite image of the Wallow North Fire in east central Arizona was taken on June 15, 2011 at 19:54:23 Zulu (3:54 p.m. EDT). This false-colored image uses a 7, 4, 2 band combination and shows the burn scar in red the fire ongoing in really bright red, vegetation is green, smoke is blue and bare ground is tan.
(Image: © NASA/USGS, Mike Taylor)

The raging Wallow Fire that has burned nearly 500,000 acres of Arizona is slowly being contained by firefighters with some help from eyes in the sky.

About 33 percent of the fire is contained, but high winds that can cause wildfires to spread could tax those containment efforts. Emergency managers and responders are using satellite data from a variety of instruments to plan their firefighting containment strategies and mitigation efforts once the fires are out.

The Landsat 5 satellite captured images of the Wallow Fire burning in eastern Arizona on June 15 at 3:54 p.m. EDT. Both images are false-colored to allow ease of identification of various objects that will help firefighters and emergency managers. In the images burn scars appear in red and ongoing fire in bright red. Vegetation is green, smoke is blue and bare ground is tan. [NASA Photos: Raging Arizona Wildfires Seen from Space]

The Wallow Fire began May 29 in the Bear Wallow Wilderness area in eastern Arizona. High winds and low humidity meant that by June 14 the Wallow Fire became Arizona's largest wildfire to date — the fire has burned 495,016 acres, according to government records.

About 2,000 firefighters from across the country have joined forces to battle the Wallow Fire. They use several methods, including so-called controlled burns, where firefighters try to choke off the fire by burning anything that could fuel it. Firefighters use torches at night to burn tinder and other fuel sources.

Other crews are digging around unburned areas to create "islands" free of fire-fueling vegetation to protect homes.

Landsat also snapped images of the Horseshoe 2 fire, which began on May 8 in Horseshoe Canyon in the Douglas Ranger District of the Coronado National Forest, in southeast Arizona. The Chiricahua National Monument in the northern area of the fire was closed on June 9 and remains closed. NASA's Terra satellite has also contributed images of the fires.

As of June 16, the Horseshow 2 Fire had burned 184,198 acres and was 65 percent contained, according to government records.

The Landsat series of satellites, jointly managed by NASA and the U.S. Geological Survey, is used by emergency managers to acquire a range of imagery and data, from floods to fires. Landsat has also provided images of the Mississippi River flooding.

Wildfires are also burning in the Southeast, with the Honey Prairie Fire in Georgia and the Espanola Fire in Florida.