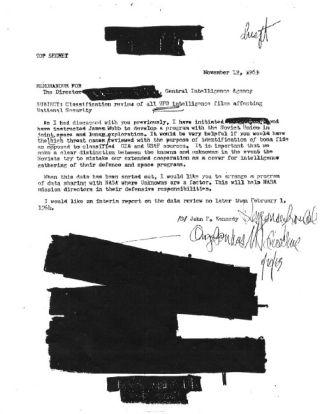 A story that combines UFO cover-ups with the assassination of John F. Kennedy is a gold mine for conspiracy theorists. And that's just what author William Lester says he uncovered while conducting research for a new book on Kennedy: a memo written by JFK and addressed to the CIA in which the president requests confidential information about UFOs.

In the never-before-seen, top secret memo supposedly written on Nov. 12, 1963, the president ordered the CIA director to organize the agency's intelligence files relating to UFOs, and to debrief him on all "unknowns" by the following February. Ten days later, Kennedy was assassinated.

The newly surfaced document is bound to add fuel to the undying fire surrounding the president's death. But first things first: Is the document authentic? [Top 10 Conspiracy Theories]

'Something odd about it'

Lester, a paranormal researcher and author of the new book "A Celebration of Freedom: JFK and the New Frontier" (Wasteland Press, 2010), said he obtained the memo along with two others from the CIA under the Freedom of Information Act.

"The government regularly declassifies documents after a certain amount of time goes by, and then you have to file a request for those documents," Lester told Life's Little Mysteries, a sister site of SPACE.com. "When I was in the process of filing, those letters had just become declassified and released to the public." This happened in 2006 or 2007, Lester said. "At the time, I think other people were getting them too."

The top secret memo hasn't turned up anywhere else besides Lester's book, however, and some archivists question its authenticity. A research technician at the JFK Library in Boston, who asked not to be named, was unable to find a carbon copy of it in its presidential archive, which holds copies of all of JFK's letters.

"We did some research into the presidential papers to try to find any evidence of the Nov. 12, 1963 letter to the director of the CIA, John McCone," the technician told Life's Little Mysteries. Despite the fact that JFK kept carbon copies of all his letters, even the classified ones, "in searching through the president's office files -- CIA, NASA and National Security files -- we could find no evidence of this memo or anything like it." [Ten Alien Encounters Debunked]

Furthermore, it doesn't look like other the top secret memos Kennedy wrote during his presidency.

"Something is a little odd about it," the technician said. "It is sanitized in very odd places: the director's name, the top heading of the document (which usually distinguishes which agency is generating it) and then the tiny "top secret" print at the top of letter. Top secret items are usually stamped in large dark ink on the letter."

Lester claims that the new declassified memo is thus the missing link in a conspiracy theory surrounding another document that many conspiracy theorists think indicates that the CIA killed Kennedy to prevent his involvement in a UFO cover-up. However, this second document, and thus the conclusion, is also suspect.

This document, called the "burned memo," was passed to the fringe media in 1999 by an anonymous source claiming to be a former CIA operative. The alleged leaker said he worked for the CIA between 1960 and 1974 and pulled the memo -- which experts have never verified as authentic -- from a fire when the agency was burning some of its most sensitive files.

In the "burned memo," the CIA director at the time (his name is blacked out) allegedly wrote: "Lancer [the CIA's codename for JFK] has made some inquiries regarding our activities, which we cannot allow. Please submit your views no later than October. Your action to this matter is critical to the continuance of the group."

The new memo, Lester said, proves JFK really was probing the CIA about UFO intelligence, and that the CIA might have taken steps to prevent this. "If Kennedy had gotten some level of control of this issue from NASA or the CIA, who's to say he wouldn't have disclosed that information to the American public? Who knows where that would have led?" Lester commented.

Given that most historians believe the "burned memo" is a fake, however, the connection to the CIA's secret plot to assassinate JFK doesn't stick.

Alternatively, even if the burned memo is fake but the newly surfaced memo is real, there are several perfectly logical reasons why Kennedy might have written it. Lester believes the president was interested in UFO intelligence for three reasons.

First, Lester said, Kennedy was concerned that UFOs seen by the Soviets would be misinterpreted by them as being U.S. aircraft behaving provocatively. This may be what Kennedy implied when he (allegedly) wrote, "It is important that we make a distinction between known and unknowns in the event the Soviets try to mistake our extended cooperation as a cover for intelligence gathering of their defense or space programs."

The second reason for Kennedy's inquiry could have been his obvious interest in space travel; at the time of his (alleged) writing, NASA was a new agency, Lester explained, and "the whole question of outer space and life in outer space was at the forefront of everybody's thinking." Third, there was a natural concern about UFOs at the time due to a spurt of incidents thought to be sightings.

In the 1960s, nearly everyone was interested in UFOs -- JFK, NASA, the CIA and citizens alike.

This story was provided by Life's Little Mysteries, a sister site of SPACE.com. You can follow staff writer Natalie Wolchover on Twitter @nattyover.