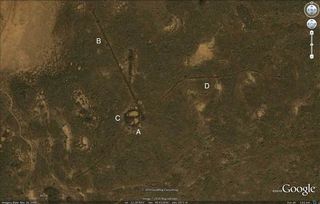 Google Earth maps showed 1,977 structures built of basalt stone from the surrounding lava field in Jeddah, including various pendants, or circular mounds similar to collapsed tombs with processions of small stone piles branching out from them (A, B, C and D).
(Image: © Google Earth, Courtesy of David Kennedy/Journal of Archaeological Science)

Little is known about the archaeology of Saudi Arabia, as the government has historically forbid aerial photographs of the landscape and religious sensitivities have made access tricky. But Google Earth is changing that. Satellite images available via the Web-based 3-D map program show that large portions of the country hold a wealth of archaeological remains that predate Islam and may be several thousand years old.

Researchers recently discovered nearly 2,000tombs by peering through one high-resolution "window" at a rocky lava field east of the city of Jeddah — all without having to set foot in the Saudi desert.

Judging by the sheer number of stone ruins identified in Saudi Arabia, as well as in other research in Jordan, there may well be a million such sites scattered throughout the Arabian Peninsula, said David Kennedy, an archaeologist at the University of Western Australia who led the study.

Eye in the sky

Kennedy has spent the past 35 years surveying Jordanian archaeological sites, mainly from aircraft — a technique that archaeologists have relied on for decades to identify and map sites not readily visible from the ground. He found plenty of sites near the Saudi border, but wondered what was on the other side. The Saudi government had commissioneda broad archaeological survey in the 1970s and 1980s that revealed about 1,800 tombs and other sites throughout the country, but the government all but prohibited the use of aerial photography even to its own surveyors.

Juris Zarins, an archaeologist who worked in Saudi Arabia for 15 years and led parts of the national survey, suggests religious sensitivities play a role in the government’s limitations on archaeology . "They don’t want people fooling around with prehistory because it contradicts the Koran — any more than fundamentalist Christians want anyone to say anything is older than six thousand years," Zarins told LiveScience.

Since satellite imagery has become widely available in the last decade, and particularly since Google Earth launched in 2005, archaeologists have used it to scan for ruins over large landscapes around the globe. About two years ago, a few sharp windows on Saudi Arabia opened up, and Kennedy got his first peek at the ground.

"I was able to actually see across the border, courtesy of Google," he said, and what he saw was "marvelous" — thousands of sites in just the handful of available windows.

Window on the desert

Kennedy and a Saudi collaborator started with a preliminary study of a small area 250 miles(400 kilometers) north of the Jeddah site. There they spotted hundreds of large stone structures called kites, which scientists think were used for trapping and corralling animals.

For the present study, published online Jan. 28 in the Journal of Archaeological Science, Kennedy and a colleague, M.C. Bishop, took a more methodical look at a 480-square-mile window near Jeddah. They located 1,977 structures built of basalt stone from the surrounding lava field. The most numerous are cairns — circular mounds similar to collapsed tombs found in Jordan and Yemen — and "pendants," which are cairns from which processions of small stone piles march as far as 3 miles off into the desert.

Some of the funeral monuments stand alone, others were built on top of one another; some are aligned, others are scattered willy-nilly across the landscape. Most of them were probably looted long ago, Kennedy said. A few less distinctively shaped ruins could be the remains of seasonal living quarters.

Kennedy sent the coordinates of a couple of sites to a friend living near Jeddah, who forayed into the desert with a GPS to photograph them. Where the satellite images clearly show a cairn and its pendant, photographs show a "rather uninspiring sea of boulders" that would be "a nightmare" to attempt to locate or map from the ground, Kennedy said.

So who were the people who built all these structures? Most likely pastoral nomads who moved between camps herding goats, sheep, donkeys, and later horses and camels, said Zarins. He said the structures probably date from between 4000 and 1000 B.C., a time when the region's climate was generally wetter and more hospitable than it is today.

Feet on the ground

While acknowledging that the new information offers new insights, it's not enough to simply peer down from space, said Zarins, who is now retired from Missouri State University and living in Oman, where he uses Google Earth in his own excavations.

And in that sense, he said, Kennedy and Bishop's paper failed to advance what he and others have known about for decades. The survey in the 1970s and 1980s showed that there are numerous tombs and other ruins throughout Saudi Arabia, but the lack of aerial photography made identifying or mapping all of them impossible.

"Yes, I can see there are tombs of various kinds in the lava fields of western Saudi Arabia. We've known about these for years and years and years," Zarins said. He added that the new imagery couldn’t answer a number of crucial questions. "When was it? What period? How did they operate? Where did they live? What's the function? None of that can be done on the basis of just satellite imaging," he said.

Kennedy said he agreed — up to a point. "It's just so much more informative to see things from above. It's not going to give you the whole answer, it's just a starting point. But it's the ideal starting point," he said.

And with Google Earth's image collection constantly expanding, armchair archaeologists will have plenty of work for years to come, Kennedy said."The quality is constantly being enhanced for Saudi Arabia and the size of the windows is constantly increasing. So the potential is immense."