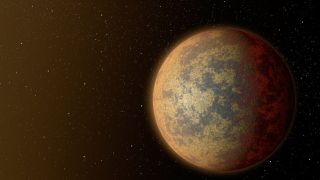 An artist's conception of the planet HD 219134b, one of the nearest rocky exoplanets to our solar system. This planet, which is about 1.6 times as big as Earth, is blazing hot, with a partially molten surface.
(Image: © NASA/JPL-Caltech)

Recent exoplanet surveys suggest that there might be thousands of Earth-like worlds in other solar systems, just waiting to be discovered. It's too bad that their atmospheres — and, with them, any hope of sustaining life — were probably obliterated by their local stars.

That's the ruthless takeaway of a new study published April 19 in the journal Astronomy and Astrophysics, anyway. In the new paper, a team of European researchers created a computer model to simulate atmosphere formation on Earth-like planets orbiting around hot, young stars. Because young suns tend to emit extremely high amounts of X-rays and ultraviolet (UV) radiation, most potentially habitable exoplanets would likely see their atmospheres obliterated within 1 million years of the planet's birth. [9 Scientific Excused For Why We Haven't Found Aliens Yet]

"An Earth-like atmosphere cannot form when the planet is orbiting within the habitable zone of a very active star," the researchers wrote in the study. "Instead, such an atmosphere can only form after the activity of the star has decreased to a much lower level."

When astronomers talk about the activity of a star, they're referring to the amount of radiation emitted. Not unlike humans and puppies, young stars tend to be highly active, then significantly decrease their activity levels as they age. The precise activity levels at different ages depend on the star's mass.

In the case of M-dwarf stars — which are slightly smaller than Earth's sun and believed to be the dominant type of star in nearby solar systems — it can take several billion years before solar activity diminishes to levels comparable to Earth's sun today. In that time, the researchers found, any exoplanet orbiting in the habitable zone around such a star would be bombarded with so much radiation that there would be little chance of an atmosphere surviving the first 100,000 years.

As a result, most Earth-like exoplanets detected around M-dwarf stars in nearby solar systems probably have very thin atmospheres or none at all, the researchers concluded, leaving the surfaces of those planets exposed to the punishing effects of solar radiation. Unfortunately, that means life on even the most habitable-looking planets might be rarer than previously thought.