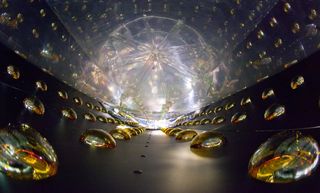 This photo shows the inside of a cylindrical antineutrino detector designed to detect the rare fundamental particles.
(Image: © Roy Kaltschmidt photo, LBNL)

We're full of neutrinos all the time. They're everywhere, nearly undetectable, flitting through normal matter. We barely know anything about them — not even how heavy they are. But we do know that neutrinos have the potential to alter the shape of the entire universe. And because they have that power, we can use the shape of the universe to weigh them — as a team of physicists has now done.

Because of physics, the behaviors of the smallest particles alter the behaviors of whole galaxies and other giant celestial structures. And if you want to describe the behavior of the universe, your have to take into account properties of its tiniest components. In a new paper, which will be published in a forthcoming issue of the journal Physical Review Letters, researchers used that fact to back-calculate the mass of the lightest neutrino (there are three neutrino masses) from precise measurements of the large-scale structure of the universe.

They took data about the movements of roughly 1.1 million galaxies from the Baryon Oscillation Spectroscopic Survey , stirred it up with other cosmological information and results from much smaller-scale neutrino experiments on Earth, and fed all that information into a supercomputer.

"We used more than half a million computing hours to process the data," study co-author Andrei Cuceu, a doctoral student in astrophysics at University College London, said in a statement. "This is equivalent to almost 60 years on a single processor. This project pushed the limits for big data analysis in cosmology."

The result didn't offer a fixed number for the mass of the lightest type of neutrino, but it did narrow it down: That species of neutrino has a mass no greater than 0.086 electron volts (eV), or about six million times less than the mass of a single electron.

That number sets an upper bound, but not a lower bound, for the mass of the lightest species of neutrino. It's possible that it doesn't have any mass at all, the authors wrote in the paper.

What physicists do know is that at least two of the three species of neutrino have to have some mass, and that there's a relationship between their masses. (This paper also sets an upper boundary for the combined mass of all three flavors: 0.26 eV.)

Physicists may never perfectly pinpoint the masses of the three neutrino species, but they can keep getting closer. The mass will keep getting narrowed down as experiments on Earth and measurements in space improve, the authors wrote. And the better physicists can measure these tiny, omnipresent components of our universe the better physics will be able to explain how the whole thing fits together.