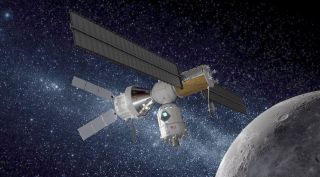 NASA foresees developing on a minimal version of a lunar Gateway, like this industry concept, to support a human lunar landing in 2024.
(Image: © Lockheed Martin)

WASHINGTON — While the administration continues to work on a revised budget request for carrying out the new goal of landing humans on the moon in 2024, the technical plan for doing so is starting to take shape.

In a presentation at a joint meeting of the Space Studies Board and Aeronautics and Space Engineering Board here April 30, Bill Gerstenmaier, NASA associate administrator for human exploration and operations, outlined the agency's current thinking about how it could land people on the moon in 2024, albeit in a minimalistic approach.

"We're off building that plan, and it fits on paper," he said. "But I will tell you it is not easy and it is not risk-free."

The approach, as he described, would require three launches of the Space Launch System heavy-lift rocket and Orion spacecraft, starting with the uncrewed Exploration Mission (EM) 1 mission already in development. That mission has suffered delays because of problems assembling the core stage of the rocket, specifically its engine section, and Gerstenmaier said the agency was taking steps, such as horizontal integration of the core stage elements, to recover some schedule.

Gerstenmaier said NASA was still considering whether to carry out the "green run" static-fire test of the SLS core stage at the Stennis Space Center, or if there are ways of "expediting" that test. The agency's Aerospace Safety Advisory Panel, at its latest meeting April 25, recommended NASA carry out the test, and Gerstenmaier noted that the alternative of doing a brief static fire at the Kennedy Space Center — no more than 10 seconds, versus the eight-minute green run test — wouldn't test everything they would like.

He said that, in a best-case scenario, EM-1 would launch in late 2020, "but probably more than likely some time in 2021." A crewed test flight, EM-2, would follow in 2022, a date he said likely would not be affected by the EM-1 schedule. EM-3 would then carry out the initial lunar landing mission.

Related: NASA's Exploration Mission 1: A Return to the Moon in Pictures

NASA, meanwhile, would be working on other elements of the lunar landing architecture. The agency announced April 26 it was modifying an upcoming broad agency announcement that is part of its Next Space Technologies for Exploration Partnerships program that will now seek proposals for integrated lunar lander concepts. "Now we're asking for a service of ascent, descent and transfer [stages], essentially an all-in-one service for landing," he said.

That is a shift from earlier plans, which called for procuring the stages separately and having NASA integrate them. "We thought that might be slower, and if we gave accountability for all that to one entity, they could make those trades," he said, such as approaches that would require only two stages. NASA might support multiple companies through at least part of the development effort "so we have the ability that, if one gets in trouble, the other one will be there."

The plan also makes use of a minimal version of a lunar Gateway. Gerstenmaier said NASA was moving ahead with the Power and Propulsion Element, evaluating proposals submitted by industry in November. A selection, he said, should come this summer, with the unit launched by the end of 2022.

The only other element of the Gateway planned prior to a 2024 lunar landing is "some kind of docking/habitation small module," he said. "That is all that is needed to essentially support a lunar landing."

In an earlier presentation at the board meeting, Ryan Whitley, director of civil space policy at the National Space Council, suggested a Gateway might not be needed at all. "Some people were wondering if the Gateway was still in the plans. Well, it may not be in the initial critical path to getting to the first landing in 2024," he said, but added it is still considered "part of the sustainable solution" for long-term lunar exploration.

He backtracked somewhat in a later question-and-answer session with board members. "We believe that a minimal Gateway is part of the 2024 solution," he said, but wouldn't rule out alternative approaches that don't require a Gateway at all, such as landers that could dock directly with Orion in lunar orbit. "It's just a matter of how that ends up playing out in the design of the systems."

In his presentation, Gerstenmaier said even a minimal Gateway provides a place to aggregate hardware, such as the components of lunar landers. It can also serve as a "safe haven" that a lander can abort to. "It allows us to relax some of our constraints from a human-rating standpoint on the lunar landing and ascent vehicles."

Gerstenmaier said that the approach for a human lunar landing in 2024 is minimalistic. "I would say, for the initial 2024 landing, it's going to be pretty Spartan," he said when asked about the development of spacesuits for lunar excursions. "We're looking at what the minimum is we need for suits to go out and do things. We're going to keep that as small and as lean as we can."

"It's not pretty. There will not be a ton of time on the surface on this first flight," he said. "You're going to see a pretty minimalist kind of mission for that 2024 mission because of the constraints."

One issue he didn't discuss is the cost of the 2024 mission. While NASA Administrator Jim Bridenstine said in early April at a House Science Committee hearing that a revised budget proposal to accommodate the new 2024 human lunar landing goal would be ready around or shortly after April 15, that proposal has yet to be delivered to Congress.

"Right now I'm in the process of building a compelling presentation that lays out enough details technically" to convince Congress to support the plan, Gerstenmaier said. "We'll know in the next couple of weeks whether we're successful or not."

That budget amendment "is still very much in flux," Whitley said, but didn't discuss when it's likely to be complete or how much additional funding it's likely to request.

"It's still within the administration," James Reuter, NASA associate administrator for space technology, said of the revised budget in an April 30 presentation to the NASA Advisory Council's technology committee. He said he didn't expect much in the way of new details about the revised budget when Bridenstine testifies before a Senate appropriations subcommittee May 1.

"Shortly after that is the target to get it over," he said of delivering that amended budget to Congress. "It's recognized, to make 2024, there needs to be more budget, substantially more budget."