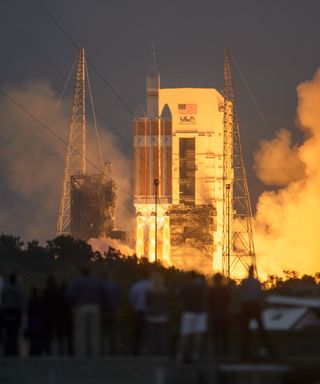 As shocking as it sounds, NASA won't be breaking new ground if it does indeed go with a private rocket for the upcoming test flight of its Orion crew capsule.

During a Senate hearing Wednesday (March 13), NASA chief Jim Bridenstine said that the space agency aims to launch Orion on an uncrewed mission around the moon by June 2020, as planned. It appears that NASA's Space Launch System megarocket (SLS) won't be ready to go in time, so the flight — known as Exploration Mission 1 (EM-1) — may lift off atop a commercial rocket instead, he added.

Bridenstine didn't mention any private boosters by name, but there are only two American rockets flying today powerful enough to do the job — SpaceX's Falcon Heavy, which flew for the first time last year, and the Delta IV Heavy, which is built by United Launch Alliance (ULA).

Related: The World's Tallest Rockets: How They Stack Up

Orion already has a history with the Delta IV Heavy. The booster launched the capsule on its first and only space mission to date, an uncrewed jaunt to Earth orbit in December 2014 known as Exploration Flight Test-1 (EFT-1).

Here's a video to refresh your memory.

Here's a video look at that splashdown.

EM-1 is much more ambitious. If all goes according to plan, Orion will spend nearly a month in deep space, including a week or so in orbit around the moon, to help demonstrate that it's ready to carry astronauts.

EM-1 will also loft 13 cubesats as secondary payloads. These little spacecraft will do a variety of science work, from hunting for water ice on the moon to measuring the long-term effects of space radiation on yeast DNA.

To be clear, we don't know that NASA is going private for the EM-1 mission; Bridenstine told the senators that a decision is expected in a couple of weeks. And the NASA chief stressed that SLS remains a big part of the agency's long-term plans regardless of what happens with the upcoming test flight.

"The Space Launch System, SLS — the largest rocket that's ever been built in American history — is a critical piece of what the United States of America needs to build," Bridenstine said.