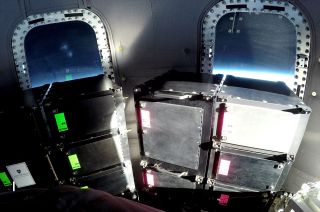 The blue haze of Earth's horizon glows through the windows behind payload racks aboard a Blue Origin New Shepard capsule in space. An auction benefiting SPACE on Ryder Farm is offering to fly an item of the winner's choice on a New Shepard flight.
(Image: © Blue Origin)

A charity auction is offering an out-of-this-world chance: launch something of yours into outer space.

Charitybuzz's annual holiday auction, which offers celebrity encounters, vacation packages and sports experiences to benefit a wide variety of charitable causes, is now accepting bids to send your own chosen item on a suborbital spaceflight.

"This is your once-in-a-lifetime opportunity to send an item of [your] choosing to outer space on the exclusive Blue Origin New Shepard," the Charitybuzz auction listing reads. "Named after Mercury astronaut Alan Shepard, the first American to go to space, New Shepard is a reusable suborbital rocket system designed to take astronauts, research projects and now your special item (payload) into [space]!"

Blue Origin, founded by Amazon CEO Jeff Bezos, flew its twelfth New Shepard mission since 2015 on Wednesday (Dec. 11). The uncrewed launch, which flew above the 62-mile-high (100-kilometer) Kármán line that internationally marks the beginning of space, carried science and art experiments, including payloads from the company's 100th customer.

The successful mission also lofted thousands of children's postcards as the first activity of Blue Origin's own non-profit organization, the Club for the Future.

The Charitybuzz auction lot will place the winning bidder's item on a New Shepard suborbital spaceflight in 2020.

"Your item, be it a photo of your loved one or a piece of art, will spend 11-minutes in flight and make its way back to you via mail following its journey," the lot reads.

The auction benefits SPACE on Ryder Farm, which despite its name, is not space-related. Located north of New York City on the grounds of Ryder Farm in Brewster, New York, SPACE is a non-profit artist residency program and organic farm.

"SPACE on Ryder Farm creates an environment singular in its ability to invigorate artists and innovators and their work, and contributes to the sustainability and resourceful preservation of one of the oldest organic family farms on the East Coast," the Charitybuzz website says about the 224-year-old family homestead.

SPACE came to offer space on Blue Origin's New Shepard through the help of a former NASA associate administrator for education, who is related to a member of the residency program's staff.

According to the rules posted with the auction, the winning bidder's chosen item will need to fit within a 4-inch by 4-inch by 8-inch box (10 by 10 by 20 centimeters), the same size as Blue Origin's Nanolab designed to carry student experiments. The payload can be no more than 1.1 pounds (0.5 kilograms) and must abide by Blue Origin's New Shepard restrictions, including "no hazards: chemical, biological [or] stored energy."

The winner will need to identify the item to be flown three months before the flight and have it shipped, at his or her expense, to Blue Origin's West Texas launch site at least two weeks before the mission. If the winner fails to deliver the item on schedule, he or she will not only forfeit the opportunity, but also be assessed a fee.

The winning bidder's chance to fly an item cannot be re-sold or re-auctioned. The winner will be required to sign a contract with SPACE on Ryder Farm and a non-disclosure agreement with Blue Origin.

The Charitybuzz auction is a rare opportunity, but not the first time that access to be space has been auctioned to benefit a charity. In 2013, three seats to fly with actor Leonardo DiCaprio on a future Virgin Galactic SpaceShipTwo suborbital flight were sold for 3 million euros ($3.8 million at the time) at an amfAR Cinema Against AIDS charity dinner held in Cannes, France. A year later, the company's founder, Richard Branson, auctioned a seat on a different spaceflight for $300,000 to benefit Baptist Cardiac & Vascular Institute in Miami.