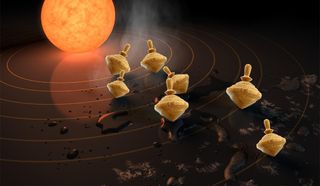 Many alien planets around stars like our sun are potentially extraordinarily tilted, leading to dramatic swings between extreme winters and summers, a new study finds.

NASA's Kepler spacecraft revealed that about 30 percent of stars similar to our sun harbor super-Earths. As their name implies, super-Earths are a bit bigger than Earth, at about two to 10 times Earth's mass.

The super-Earths found so far also typically lie relatively near their stars, taking less than 100 days to complete an orbit, according to a statement on the new work. In comparison, Mercury takes about 88 days to go around the sun.

Now researchers suggest the potential answer to this mystery is that such worlds are highly tilted. "If true, this implies that their seasons are extreme, and their weather and climates will be affected non-trivially as well," lead study author Sarah Millholland, an astronomer at Yale University in Connecticut, told Space.com.

Previous research suggested that when planets are close to coming into orbital resonance, the gravitational pull of their stars on these worlds can result in tidal forces that can drain energy away from their orbital motions, converting it to heat and keeping those worlds from synchronizing their orbits. However, prior work also found such tidal forces are not by themselves strong enough to prevent orbital resonance, the researchers said.

The scientists ran computer simulations modeling what happens when the poles of these planets are tilted with respect to their orbits. They found that with high axial tilts, tidal forces "are exceedingly more efficient at draining orbital energy into heat in the planets," Millholland said in the statement.

The greater the axial tilt, the more variation in how much sunlight different parts of a planet receive over the course of its year. Earth's axial tilt of about 23.5 degrees results in its seasons; Uranus' extreme axial tilt of 98 degrees leaves the winter side of the planet in complete darkness for 21 years and the summer side in constant daylight for the same amount of time.

"Up until now, the typical assumption was that close-in exoplanets have zero axial tilt," Millholland told Space.com. "Our study suggests otherwise."

The phenomenon the scientists discovered may also lead to extraordinary amounts of heating in these exoplanets. A similar effect results in Jupiter's moon Io "having extreme volcanic activity; it is the most geologically active body in the solar system," Millholland said.

The researchers "are not suggesting that spin poles of all exoplanets are highly tilted," Millholland noted. However, if a significant fraction are, that would explain why so many close-in super-Earths have the orbits that astronomers have detected, she said.

The scientists are now analyzing the ways in which heating related to high axial tilt may influence the structures of these planets, Millholland said. Exoplanets with high axial tilts should possess heat signatures detectable by future space missions, such as the James Webb Space Telescope, the researchers added.

The scientists detailed their findings online March 4 in the journal Nature Astronomy.