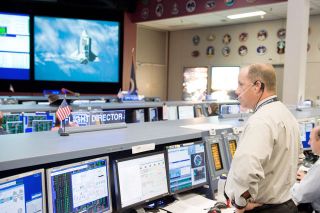 Forty years after astronauts called down from space reporting, "Houston, we've had a problem," it was Mission Control's turn Tuesday to call up to the crew with a similar but far-less life-threatening call.

Problems with pressurized tanks led to both calls. For the Apollo 13 crew in 1970, it was the explosion of an oxygen tank midway to the moon that required flight controllers on Earth to scramble to save the lives of the astronauts.

For the International Space Station's (ISS) Expedition 23 crew, as well as the visiting shuttle Discovery astronauts, the stuck valve between a newly-installed ammonia tank and a nitrogen tank responsible for feeding coolant to half of the station was causing Mission Control concern but it was not an emergency for the 13 people in space.

"The severity of this problem is obviously much lower than on Apollo 13," said ISS flight director Ron Spencer on Tuesday.

Although not as an immediate a concern as the problem four decades ago, if Spencer's team cannot devise a fix in the coming weeks and months, it could force them to shut down half of the station's systems.

Spencer did, however, see parallels between how Mission Control today approaches problems like this and how his Apollo 13-era colleagues worked.

"I think the way we deal with problems is the same as it was back then," Spencer said. "The methodology that goes on in Mission Control for running the mission and having contingency plans, that's all identical."

A testament to teamwork

However, had the problem been more serious Discovery's commander believed his crew could have also met the challenge.

"Jim Lovell and his crew, as highly trained as they were, we would hope that we could achieve what they did in the face of adversity," STS-131 commander Alan Poindexter told collectSPACE.com before he launched. "Those guys were real pros."

Clayton Anderson, one of the spacewalkers responsible for installing the new ammonia tank, shared a similar hope largely due to the support teams on the ground.

"What I remember about Apollo 13 aside from the fact that it was a very tense and very stressful time, was that we succeeded, that the United States of America solved the problem and brought these guys home safely," Anderson said in a pre-flight interview. "And now to be one of those guys and to work with the folks [in Houston] at Johnson Space Center and all around NASA as an organization, it is extremely comforting to me to know the pedigree of the people who work here and work on this program."

"I have true confidence in all the folks who I'm associated with because they are such true professionals. They are so dedicated and they'll do anything to make this mission a success," he said.

"It really is a testament to teamwork," remarked mission specialist Stephanie Wilson from space. "Flight crews, the mission control centers, the folks who train us and work on procedures, folks that get our vehicles ready and really know the ins and outs of the vehicles, really all have to come together in an emergency."

"But from every emergency, we learn something new, we update our procedures, we update our response times and it really is an opportunity to get to be more familiar with things but also to come together and work better together as a team," Wilson said during a media interview.

Failure is (still) not an option

Discovery's pilot Jim Dutton was only two years old when Apollo 13 became NASA's "successful failure" but as he learned about the mission growing up, it stood out to him.

"Even though they didn't accomplish their primary mission of landing on the moon, it was still one of the most inspirational missions that NASA has ever had. Why? Because they faced tremendous adversity. I mean, they never really should have survived," Dutton said during an interview with collectSPACE.com.

"And yet of course, there is the famous saying, "Failure is not an option." While we all know sometimes failure does happen, it's that mindset that we are not going to consider it an option, that we're going to do everything in our power and not consider that we can fail."

For Spencer, failure is not an option for freeing the stuck valve, but neither is another spacewalk, at least for now.

"Going EVA to fix this problem is not the first option," he told reporters. There's going to be a couple of other things we can try... EVA is the last option."

Click through to collectSPACE to read about the surprising stories shared by the Apollo 13 crew.