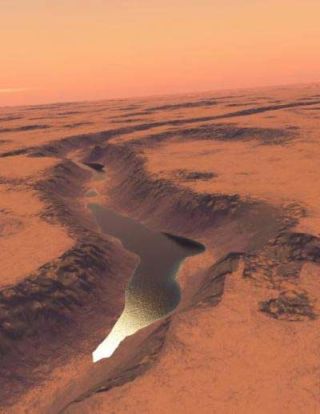 This illustration of reconstructed Mars landscape shows the presumed Shalbatana lake on Mars as it might have looked roughly 3.4 billion years ago, scientists said on June 17, 2009. Data used in reconstruction are from NASA and the European Space Agency.
(Image: © Image credit: G. Di Achille, University of Colorado)

Several studies in recent years have claimed evidence for shorelines and other features that suggest ancient lakes on Mars. Firm evidence has remained elusive.

Now a University of Colorado at Boulder research team claims "the first definitive evidence of shorelines on Mars" in a statement released today.

The scientists see signs of "a deep, ancient lake," which would have implications for the potential for past life on Mars. Life as we know it requires water, and while Mars is dry now, if there was abundant water in the past -- as many studies have suggested -- then life would have been a possibility. There is, however, no firm evidence that life does or ever did exist on the red planet.

Researchers estimate the lake existed more than 3 billion years ago. It covered as much as 80 square miles and was up to 1,500 feet deep -- roughly the equivalent of Lake Champlain bordering the United States and Canada, said Gaetano Di Achille, who led the study out of the University of Colorado at Boulder.

The shoreline evidence, found along a broad delta, included a series of alternating ridges and troughs thought to be surviving remnants of beach deposits.

"This is the first unambiguous evidence of shorelines on the surface of Mars," Di Achille said. "The identification of the shorelines and accompanying geological evidence allows us to calculate the size and volume of the lake, which appears to have formed about 3.4 billion years ago."

The findings have been published online in Geophysical Research Letters, a journal of the American Geophysical Union.

Other studies have claimed evidence for lakes on Mars too, however, including one in Holden Crater announced last year.

And several studies have found evidence -- from possible shorelines to salty deposits indicating the evaporation of water -- for shallow lakes or oceans. Ancient Mars had abundant water, many lines of evidence indicate.

Images used for the study were taken by the High Resolution Imaging Science Experiment, or HiRISE camera on NASA's Mars Reconnaissance Orbiter.

An analysis of the images indicates water carved a 30-mile-long canyon that opened up into a valley, depositing sediment that formed a large delta, the researchers conclude. This delta and others surrounding the basin imply the existence of a large, long-lived lake, said Hynek, also an assistant professor in CU-Boulder's geological sciences department. The presumed lake bed is located within a much larger valley known as the Shalbatana Vallis.

"Finding shorelines is a Holy Grail of sorts to us," said Brian Hynek, also of CU-Boulder.

In addition, the evidence shows the lake existed during a time when Mars is generally believed to have been cold and dry, which is at odds with current theories proposed by many planetary scientists, he said. "Not only does this research prove there was a long-lived lake system on Mars, but we can see that the lake formed after the warm, wet period is thought to have dissipated."

Further research will be needed to sort out the discrepancies, however.

Planetary scientists think the oldest surfaces on Mars formed during the wet and warm Noachan epoch from about 4.1 billion to 3.7 billion years ago that featured a bombardment of large meteors and extensive flooding. The newly discovered lake is believed to have formed during the Hesperian epoch and postdates the end of the warm and wet period on Mars by 300 million years, according to the study.

The deltas adjacent to the lake are of high interest to planetary scientists because deltas on Earth rapidly bury organic carbon and other biomarkers of life, Hynek said. Most astrobiologists believe any present indications of life on Mars will be discovered in the form of subterranean microorganisms.

But in the past, lakes on Mars would have provided cozy surface habitats rich in nutrients for such microbes, Hynek said.

The retreat of the lake apparently was rapid enough to prevent the formation of additional, lower shorelines, Di Achille said. The lake probably either evaporated or froze over with the ice slowly turning to water vapor and disappearing during a period of abrupt climate change, according to the study.

Di Achille said the newly discovered pristine lake bed and delta deposits would be would be a prime target for a future landing mission to Mars in search of evidence of past life.

"On Earth, deltas and lakes are excellent collectors and preservers of signs of past life," said Di Achille. "If life ever arose on Mars, deltas may be the key to unlocking Mars' biological past."