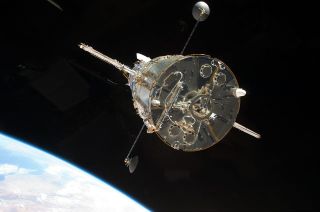 An STS-125 astronaut aboard shuttle Atlantis captured this still image of the Hubble Space Telescope as the two spacecraft begin their relative separation on May 19, 2009.
(Image: © NASA.)

Cape Canaveral, Fla. — After two false starts, the seven astronauts aboard shuttle Atlantis will finally land Sunday to end their successful repair mission to the Hubble Space Telescope. The only question is where.

Rain and thunderstorms over NASA's primary landing site here at the Kennedy Space Center thwarted the shuttle's attempts to return to Earth on Friday and Saturday.

NASA hopes for better weather in Florida on Sunday to allow a planned 10:11 a.m. EDT (1411 GMT) touchdown, but Mission Control is ready to land Atlantis at a backup runway in California if conditions don't improve.

"We plan on landing you tomorrow," Mission Control radioed the shuttle crew on Saturday.

"We will see you tomorrow," Altman told Mission Control.

Atlantis actually has enough supplies to sustain its astronaut crew through Monday, but NASA plans to land the shuttle somewhere on Earth by mid-day today. The first California landing opportunity after Florida is at 11:40 a.m. EDT (1540 GMT).

Norm Knight, the flight director in charge of Atlantis' landing, told reporters on Thursday that if weather kept the shuttle in space on Friday and Saturday — as it did — then Sunday would be his "pick 'em" day, where he'd land the spacecraft wherever conditions would permit. NASA typically keeps one landing day in reserve in case of an unexpected glitch delays landing further.

NASA prefers to land space shuttles in Florida since the Kennedy Space Center is both their home port and launch site. It costs $1.8 million to ferry a space shuttle across the country from California. That piggyback flight atop a modified jumbo jet carrier craft takes at least a week, weather permitting.

The weather in California is expected to be favorable for a shuttle landing through Monday. Bad weather is still expected over Florida on Sunday, but it may be less severe than in recent days, NASA officials said.

"It might just be a little more stable," said John Madura, weather office chief at the Kennedy Space Center. "There's some little ray of hope there."

Altman and his crew are returning to Earth after overhauling Hubble for the fifth and final time. Set to return to Earth with Altman are shuttle pilot Greg C. Johnson and mission specialists Michael Good, Megan McArthur, John Grunsfeld, Michael Massimino and Andrew Feustel.

The astronauts launched on May 11 and returned Hubble to space for good on Tuesday. Hubble scientists said the space telescope is more powerful than any other time since its 1990 launch, and is ready for at least five more years — possibly 10 more — of scanning the cosmos.

The Atlantis crew also prepared Hubble for its eventual death by attaching a docking ring. It will allow a robotic spacecraft to latch onto the space telescope sometime after 2020 and send it plummeting into the Pacific Ocean.

With NASA's three-shuttle fleet set to retire next year, Atlantis' flight to Hubble is the agency's last-ever mission to repair and upgrade the iconic space telescope. The shuttle fleet's capsule-based replacement, Orion, will be used to transport astronauts to and from the International Space Station and, ultimately, the moon when it enters service around 2015.

NASA officials have said the Hubble mission cost about $1.1 billion. In all, nearly $10 billion has been invested in the space telescope since its inception.