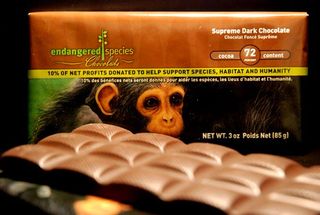 Next month,astronauts will launch to the International Space Station (ISS) taking eightendangered species chimpanzees with them on the space shuttle. The apes are notpart of a biological study, as NASA launched nearly 50 years ago, but arerather for dessert.

You see,the chimps are actually chocolate and by eating them, theastronauts are helping to save real life chimps here on Earth.

Thebar-shaped "Supreme Dark Chocolate" candy, which is producedby Endangered Species Chocolate of Indiana features a picture of a chimpanzeeon its wrapper.

"Everysingle bar has printed on it '10% of net profits [are] donated to help supportspecies, habitat and humanity'", explained Ren?e Sweany, who managespublic relations and advertising for the company. "Our biggest goal is toraise money that we can then give back to organizations that are focused onconservation."

It was a"very cool surprise" Sweany told collectSPACE when they learned theirchocolates were space-bound.

"UnitedSpace Alliance contacted us looking for stores where they could purchase thebars," she recalled. "They received the request and contacted us tolet us know."

UnitedSpace Alliance, which prepares the "crew choice" pantry aboard the shuttle, packed the eight bars forflight.

The snackrequest was made by the crew of STS-119, who will fly the 14-day mission aboard shuttle Discovery.

The barswere packed as one of their desserts. That the candy helpsthe chimpanzees and other animals was only a bonus.

The crewplans to share the chocolates with the crew of the International Space Station,including Sandy Magnus, who is known to have an affinity for chocolate. Shewill return to Earth with Discovery after three months aboard the outpost.

In additionto returning Magnus to the ground and bringing her replacement, Japaneseastronaut Koichi Wakata to the station, the mission will deliver and install anew truss segment as well as the fourth and final set of solar array wings toprovide power to the ISS.

Sweany saidthat everyone at Endangered Species was excited by the upcoming spaceflight.Previously, the most "exotic" location that their chocolates hadtraveled were to Ivory Coast and Peru, where their all-natural and organiccocoa is grown.