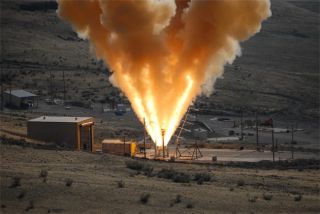 The testtook place Nov. 20 at the Alliant Techsystems (ATK) Launch Systems facility inPromontory, Utah. The 5.1-meter abort motor fired for five-and-a-half seconds,consuming most of its propellant in the first three seconds and producing morethan a half-million pounds of thrust nearly instantaneously at ignition.

ATK builtthe motor under subcontract to Orbital Sciences Corp. of Dulles, Va., which is responsible for the Orionlaunch-abort system. Lockheed Martin Space Systems of Denver is Orion's primecontractor.

Meredithsaid the test marked "a major step forward in the development of the OrionCrew Exploration Vehicle and specifically the launch-abort system that isgoing to provide a safe and reliable method of moving the entire astronaut crewin the event of the emergency from the pad all the way up to [91.44 kilometers]of altitude."