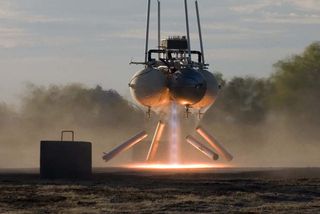 ArmadilloAerospace and TrueZer0 are making final checks on their respective rocketgear, ready to take to the sky Oct. 24 and 25 at the Las Cruces InternationalAirport.

?The NorthropGrumman LunarLander Challenge is shaping up to be a great competition this year. We havetwo teams ? the returning favorite and a new, underdog competitor ? who areboth prepared to take home some of the $2 million prize purse? if they can,? SarahBecky Ramsey, Director of Communications for the X Prize Foundation?s spaceactivities in Washington, D.C. told SPACE.com.

The X PrizeFoundation manages the Northrop Grumman Lunar Lander Challenge for the NASACentennial Challenges Program, which provides the prize purse for thecompetition.

First timeto fly in the Challenge is TrueZer0, a Chicago, Ill.-based team.

ArmadilloAerospace, based in Mesquite Texas, is a veteran of the Challenge. This band ofmaverick rocketeers flew their hardware at both the 2006 and 2007 X Prize Cup.

Last year,Armadillo nearly snagged the Level One prize, coming within seconds of triumph.Engines problemson their vehicle, however, did not allow the team to hover for the required90 seconds to win.

Each day?s rocketroaring schedule is as follows: there are three flight windows: 7:30 am, 11 am,and 2:30 pm. (local Mountain Time). Each window lasts 2.5 hours, and there is aone hour break in between each window. If everything works as planned, therewill be two flights in each window.

Dependingon the outcome of each flight attempt, the later flight windows are subject tochange - for example, the last flight window on Saturday might not be used ifit is not needed.

This is thethird year we?ve been operating the Lunar Lander Challenge for NASA?and thefirst time that we?ve had two competitors come,? said Brett Alexander,Executive Director for Space at the X Prize Foundation. ?We will have a totalof three vehicles, two from Armadillo and one from TrueZer0,? he told SPACE.com.

Just weeksago, the rocket competition had to be moved from neighboring Holloman Air ForceBase in Alamogordo to the airport at Las Cruces.

Reason forthe move, Alexander said, was due to a classified activity at Holloman in abuilding close to where Lunar Lander Challenge activities were to be carriedout. ?They didn?t want any risk to that building.?

In quickly movingthe event to the airport, Alexander added, ?we needed to keep the footprintvery small of the number of people watching for insurance, cost, and logisticsreasons?just to pull it off in the few weeks we?ve had to do it.?

Alexanderhastened to note that while the event is not open to the public, thecompetition will be webcast live at: http://space.xprize.org/webcast