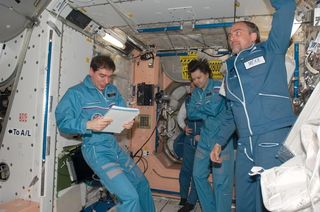 Two Russiancosmonauts and American space tourist Richard Garriott are set to cast off fromthe International Space Station tonight for the return to Earth, and they?rehoping for a smooth ride home.

Spacestation commander Sergei Volkov and flight engineer Oleg Kononenko are due toundock their Russian Soyuz TMA-12 spacecraft from the station at about 8:15p.m. EDT (0015 Oct. 24 GMT) and land on the Central Asian steppes of KazakhstanwithGarriott at about 11:36 p.m. EDT (0336 GMT). But unlike the last two Soyuzlandings, the spaceflyers are confident they?ll have an uneventful ride home.

?About ourvehicle, we?re absolutely confident,? Volkov told reporters this week. ?We hopethat everything is going to be normal and we?ll land in a normal way, not aballistic reentry.?

The lasttwo Soyuz vehicles to return to Earth - in April and October 2007 - landedin a backup ballistic mode, which touched down off-target and subjected theirthree-astronaut crews to higher than normal G-forces, after a separationfailure prevented the three-segment spacecraft from separating properly. Aftermonths of scrutiny, Russian engineers believe a failed explosive bolt to be thecause.

In July,Volkov and Kononenko removedthe suspect bolt from their own TMA-12 spacecraft during a spacewalk.Russian engineers have also come up with new software to keep the Soyuz ontarget during tonight?s landing as it reenters the Earth?s atmosphere, Volkovsaid Monday.

Garriott,too, said he has full confidence in the Soyuz spacecraft and is fully preparedfor the extra stress on his body if tonight?s landing does return under theballistic, backup mode.

?I have noconcerns about reentry ?  I?m excited about the trip home regardless,?Garriott told reporters, adding that he has simulated the extra gravitationalloads - which can reach more than eight times Earth?s gravity - in a centrifugeon Earth. ?I think that even if we were to have a ballistic reentry, it?ssomething of course I?ll tolerate well, but it also doesn?t alarm me in anyway.?

Garriott ispaying $30 million for his 10-day flight to the space station under a dealbetween Russia?s Federal Space Agency and the Vienna, Va.-based firm SpaceAdventures. He launched to the station on Oct. 12 with Expedition 18 commanderMichael Fincke and flight engineer Yury Lonchakov, who are replacing Volkov andKononenko as the cosmonauts complete their own six-month Expedition 17 mission.

?It?s kindof sad to see our guys leaving the space station, but it?s time for them to gohome,? Lonchakov said on Wednesday. ?I wish you a successful landing and we?llsee you back on Earth.?

Fincke andLonchakov joined the third member of their crew, NASA astronaut Greg Chamitoff,already aboard the station. Chamitoff joined the station?s Expedition 17 crew andwill stay on for the first stage of Expedition 18 until his relief arrives withNASA?s shuttle Endeavour next month.

Garriott iscompleting his own private spaceflight, which he packed with science experiments,educational events and Earth observation, while setting some time aside forzero gravity painting. An Austin, Texas-based computer game developer, Garriottcreated the successful Ultima online computer game series and is the sixthpaying visitor to the International Space Station.

Garriott isalso the son of former NASA astronaut Owen Garriott, who flew aboard the U.S.Skylab space station and shuttle Columbia in the 1970s and 1980s, and plans togreet his son at the landing site. The younger Garriott is the first second-generationAmerican spaceflyer.

Bycoincidence, the younger Garriott is also flying with a Russian spaceflightlegacy. Volkov is the son of famed Russian cosmonaut Alexander Volkov, and madehistory during his April launch when he became the first second-generationcosmonaut to reach space.

OnWednesday, Volkov handed control over to Fincke and his Expedition 18 crew andwished his fellow space travelers well as they work to install new equipmentover the next few months that will set the stage for larger crews.

?These guyshave a lot of difficult tasks ahead of them and I want to wish them success,?Volkov said.