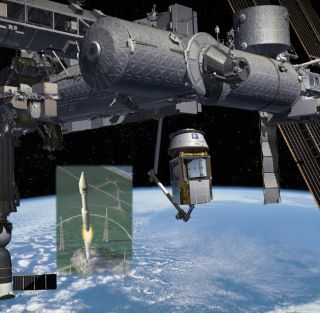 WASHINGTON - Three U.S.firms are preparing to submit final bids for a pair of NASA International SpaceStation cargo services contract worth up to $3.1 billion through 2015.

SpaceExploration Technologies (SpaceX) of Hawthorne, Calif., and Orbital SciencesCorp., of Dulles, Va., have been honing their rival offers with the aid of$500 million in demonstration money NASA awarded under its CommercialOrbital Transportation Services (COTS) program.

Also in thehunt for the two contracts NASA intends to award Dec. 23 is Chicago-basedPlanetSpace, a commercial space startup that has built a team around thebiggest names in the aerospace business.

PlanetSpaceannounced Oct. 22 that it added Boeing to a team lineup that already includedLockheed Martin Space Systems of Denver and Minneapolis-based AlliantTechsystems.

PlanetSpaceis the only one of the three teams that submitted proposals back in Juneto develop their re-supply system without the aid of NASA COTS funding.However, PlanetSpace has been meeting with NASA officials periodically toreview progress on its system under an unfunded COTS agreement signed in early2007.

SpaceX isentitled to receive up to $278 million from NASA for meeting progressmilestones spelled out in a 2006 COTS award. Orbital Sciences? 2007COTS award is worth up to $171 million. Both companies are required to showsteady progress towards demonstration flights of their respective systems.

NASA hassaid since the inception of the COTS program that winning demonstration fundingwas no guarantee of landing a cargo launch services contract. NASA also madeclear from the get-go that the eventual contract competition would be open toany U.S. firm.

Under theCargo Resupply Services solicitation issued earlier this year, NASA said it waslooking for each selected team to deliver a minimum of 20 metric tons to thespace station over the seven-year life of the contract and bring back a minimumof three metric tons of materials over the same time period. No minimum dollarvalue was specified for the contract, but PlanetSpace Chairman ChirinjeevKathuria said NASA has spelled out a maximum contract value of $3.1 billion.

Lockheed?srole on the team includes working with Boeing to develop, produce and operatemodular Orbital Transfer Vehicles that would serve as cargo carriers to the InternationalSpace Station.

The cargo vehicle would launch atop the Athena 3 rocket AlliantTechsystems is building largely from heritage hardware. The first stage is a2.5-segment version of the four-segment solid rocket boosters ATK builds for NASA?sspace shuttle fleet. The second stage is the ATK Castor 120 engine used onAthena 1, Athena 2 and Orbital?s Taurus 1 rockets. PlanetSpace is the overallprime contractor and would manage the Commercial Resupply Services contract.

?A verystrong team member has just joined us,? Simpson said. ?We have been at this forquite a while now and have, I think, a very valid offer to address NASA?s needsfor cargo re-supply and give them the assurance that somebody can actuallybring cargo to the station.?

Simpsonsaid PlanetSpace could be ready to conduct cargo launches in 2011.

NASA,meanwhile, issued a notice Oct. 15 that it intends to buy regular crewtransportation and rescue services from Russia through June 2016 under a solesource contract currently under negotiation. The notice, issued by NASA?s JohnsonSpace Center, indicates the U.S. space agency is negotiating solely for Soyuzflights and related services, not for cargo deliveries aboard the unmannedRussian Progress ship.

NASAofficials have pledged to leave Progress out of the new deal to demonstrate itscommitment to buying re-supply services from the U.S. private sector.