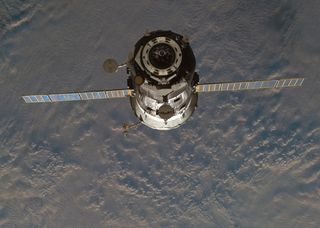 WASHINGTON — NASA has no intention ofpaying Russia to help deliver supplies to the international space station (ISS)beyond 2011 despite winning congressional and presidential approval to do so.

The U.S. space agency's recommitment to the guiding principal of its Commercial OrbitalTransportation Services (COTS) program came on the heels of U.S. PresidentGeorge W. Bush signing into law a $630 billion temporaryspending measure to keep the federal government operating at currentspending levels until early March. Among the many pieces of unfinished businessCongress addressed in the so-called continuing resolution was extending NASA'sexisting waiver to a 2000 weapons proliferation law that bars the agency frombuying space station-related goods and services from Russia as long as Russianaerospace firms continue to aid Iranian weapons programs.

Had Congress not acted toextend the agency's waiver from having to comply with the Iran-NorthKorea-Syria Nonproliferation Act (INKSNA), NASA insists it would not have beenable to conclude a new deal with Russia for the three-person Soyuzcapsules needed to transport U.S., Canadian, European and Japaneseastronauts to the international space station beyond 2011 when the existingwaiver would have expired.

NASA Administrator Mike Griffinpushed U.S. lawmakers all year to extend the waiver, even going so far asdefying the White House Office of Management and Budget by bringing up theissue during budget hearings this past winter.

The White House, however,eventually got behind the waiver and sent Congress a legislative proposal inApril that would grant NASA permission to continue buying Soyuz vehicles, butnot unmanned Progress flights, through 2016. Progress flights were left out ofthe equation at NASA's request in order to reassure U.S. launch firms that theagency remained committed to buying ISS resupply flights from proven commercialproviders.

The White House proposal,introduced in July as the International Space Station Payment Act of 2008 (S.3103), stalled in the Senate after Russia invaded neighboring Georgia in August. Shortly after the invasion, the bill's main congressional proponent,U.S. Sen. Bill Nelson (D-Fla.) declared chances of passage all but dead.

A series of last-minutedevelopments, however, combined to help win NASA the Soyuz waiver. The INKSNAissue was given new impetus Sept. 22 when Democratic presidential candidateBarack Obama, a senator from Illinois, wrote House and Senate leaders urgingextension of the waiver. The next day, the Senate Foreign Relations Committee,normally chaired by Obama's running mate Sen. Joseph Biden of Delaware,approved S. 3103, clearing the bill for the full Senate's approval.

That particular bill,which would have limited NASA's authority to buy Soyuz vehicles, went nofurther. Instead a simple extension of the current waiver was included in thecontinuing resolution, the House of Representatives passed Sept. 24 by a voteof 370-58.

The Senate followed suitSept. 27, clearing the way for the Consolidated Security, Disaster Assistanceand Continuing Appropriations Act for 2009 (H.R. 2638) to be signed into law byBush.

While NASA now has thelegal authority to put in an order for post-2011 Progress flights when it sitsdown at the bargaining table with Russia this fall, the outspoken chiefexecutive of one of the companies vying to sell resupply flights to NASA saidhe is not worried.

"I'm not superconcerned about that," said Elon Musk, chief executive and chief technicalofficer of Hawthorne, Calif.-based Space Exploration Technologies. "Ithink it's probably a good thing NASA's hands aren't tied there. It's possiblewe may lose a few flights to the Russians but we are not going to lose morethan that. There is no way Congress would tolerate sending millions of dollarsto the Russians rather than to a U.S. company and keeping that money domestic."

Musk said he does not seethat changing regardless of who is elected U.S. president Nov. 4.

In addition to permittingNASA to buy Soyuz and Progress spacecraft through 2016, the newly enactedcontinuing resolution also keeps most federal agencies funded at their 2008levels for the first five months of the new budget year, which began Oct. 1.

NASA officials have beenbracing for months for having to get by without a budget increase for all orpart of 2009.

NASA's 2008 budget was$17.3 billion, some $300 million less than the White House was seeking and $500million less than Congress appeared likely to approve had it completed separatespending bills rather than resorting to a continuing resolution for the secondtime since 2006.

Steitz saidNASA's Exploration Systems Mission Directorate — the division building Orionand Ares — and institutional spending (what NASA calls Cross-Agency Support)would be hardest hit since the continuing resolution leaves them "funded lessthan planned" for the first five months of the new budget year. "Thisrequires them to re-plan and defer activities that would have been accomplishedunder the original plan, which is less efficient, and limits our ability toaccelerate Constellation," Steitz said.