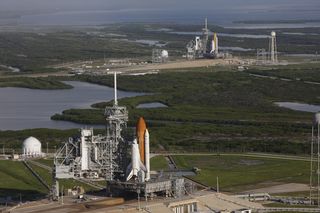 The shuttle Atlantis (foreground) sits on Launch Pad A and Endeavour on Launch Pad B at NASA's Kennedy Space Center in Florida. For the first time since July 2001, two shuttles are on the pads at the same time. Endeavour will stand by in the unlikely event that a rescue mission is necessary during Atlantis' upcoming mission to repair the Hubble Space Telescope, targeted to launch Oct. 10, 2008.
(Image: © NASA/Troy Cryder.)

Endeavouris now slated to launch toward the International Space Station on Nov. 14 at7:55 p.m. EST (0055 Nov. 25 GMT) on a mission to deliver a new crew member,fresh supplies and equipment to support larger,six-person crews aboard the orbiting laboratory.

The missionwas initially scheduled to lift off on Nov. 16, but shuttle managers said Mondaythat an earlier flight might be possible after they delayed the planned Oct.14 launch of the Atlantis orbiter dueto glitches with its target — the Hubble Space Telescope.

?There isvery little opportunity for us to accelerate that [further],? said John Shannon, NASA?sshuttle program manager, earlier this week.

Endeavouris currently perched atop the seaside Launch Pad 39B at NASA?s Kennedy SpaceCenter spaceport in Cape Canaveral, Fla., where it was slated to serve as arescue ship for astronauts headed to overhaulthe Hubble Space Telescope this month aboard the shuttle Atlantis.

But aserious glitch with Hubble on Sept. 27 forced NASA to delay the servicingflight to early 2009. The spare parts and new instruments to be installedduring that mission will be plucked from Atlantis? cargo bay on Oct. 13, withthe shuttle leaving its Pad 39A launch site at KSC on Oct. 20 for the shelterof NASA?s cavernous Vehicle Assembly Building.

Endeavour,then, will move from Pad 39B to the nearby Pad39A on Oct. 25 for its plannedNov. 14 space shot, mission managers said.

While NASAprepares Endeavour for flight, the Hubble Space Telescope will have waitanother week before resuming itsscience duties in the wake of a debilitating glitch to allow engineers more time to analyze a trickyswitch to a backup system.

Hubble hasbeen unable to relay data and images back to Earth since Sept. 27, when achannel responsible for transmitting observations to its control center failed.

Thechannel, Side A of a device called a Control Unit/Science Data Formatter,failed after operating through the 18 years since Hubble?s launch in 1990.

The spacetelescope does have a backup, Side B, but switching Hubble?s system to thatchannel also requires moving five different support systems to the new string. Engineersare also studying a replacement unit on Earth to see if it can be launched toHubble and installed to revive Side A for redundancy.

Hubblemanagers hope to make a final decision on how best to make the systems switchon Friday, Oct. 10.